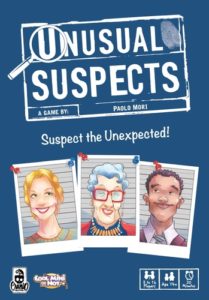 This Unusual Suspects review was made after playing the game 10 times.

What is Unusual Suspects?

Unusual Suspects is a cooperative party game in which you play as detectives working together to try to catch a thief. You’ll do this by questioning a witness who only remembers the thief’s habits and not what they look like. 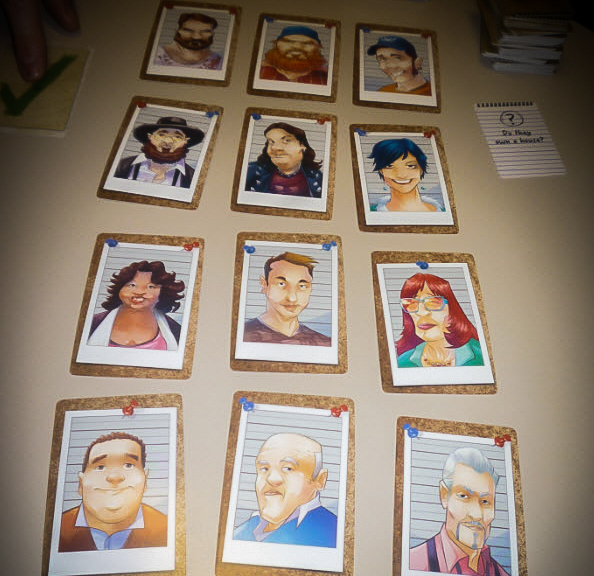 Each game of Unusual Suspects begins by choosing one player to be the witness. Then you’ll set up 12 Suspect Cards in a 3×4 grid in the middle of the table. After shuffling up the Question Cards, you’re ready to go!

Throughout the game, the witness will be answering questions from the Question Card deck. When they’re asked a question, they will simply flip over the “yes” or “no” card to show whether or not that question describes the thief.

If the thief’s card is flipped over, everyone loses. Otherwise, you’ll fill out the Investigation Pad by writing down how many suspects you’ve ruled out that round.

You’ll want to eliminate as many suspects as you can early in the game since the multiplier goes up each round. For example, in the third round, you’ll multiply the amount of suspects you’ve eliminated that round by three. That number you get for each round represents the amount of time you’ve spent trying to find the thief.

Your goal is to spend the least amount of time possible trying to catch the thief, though there is no “winning score.” This is basically a “beat your past scores” type of game.

I was a huge Guess Who fan when I was a kid, and Unusual Suspects is kind of like a cooperative version of that game for adults. It’s not necessarily our favorite co-op party game (that would be Dungeon Fighter), but it’s a great 10-minute filler game when we’re in the mood for a quick deduction game.

If you don’t like the idea of judging the suspects purely by the way they look, then definitely avoid this one. Otherwise, you’ll probably like having Unusual Suspects on your shelf when you want a quick party game that has the potential to create a lot of laughs.

Thanks for taking the time to read our Unusual Suspects review! To stay updated on all things cooperative board games, follow us on Twitter, Facebook, or via RSS.