Skip to content
Co-op Board GamesReviewsDark Souls: The Board Game Review 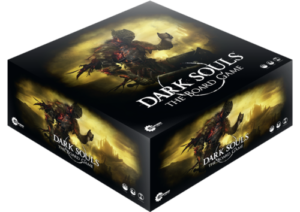 I had a chance to play this one with some folks outside of my normal group, so this is going to be my personal review rather than my group’s. This Dark Souls: The Board Game review is based on three plays.

What is Dark Souls: The Board Game?

Dark Souls: The Board Game is a cooperative dungeon crawl in which you’re trying to move through rooms, fight enemies, and hopefully defeat the final bosses. It is based on the Demon’s Souls, Dark Souls, and Bloodborne series of video games, which means that you can expect it to be a brutal and, hopefully, rewarding experience.

Dark Souls: The Board Game Gameplay 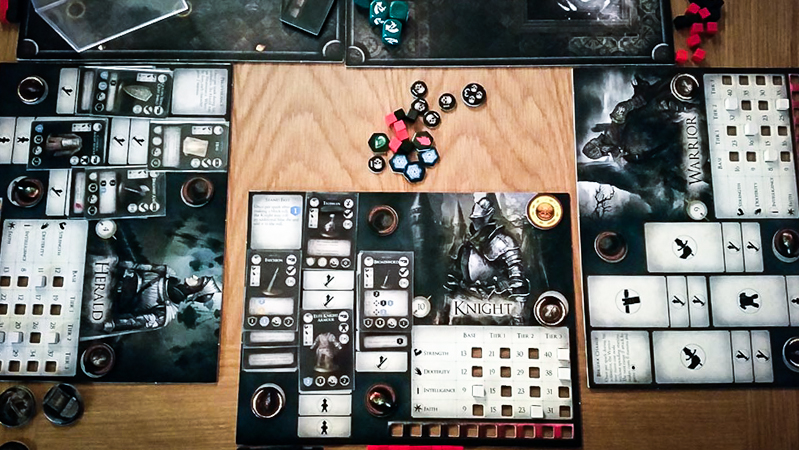 To begin a game of Dark Souls, everyone will get their own characters, each of which starts with their own player board and starting equipment. You’ll also choose which mini boss and boss you’ll be fighting, which will tell you the encounter cards that will be placed on each tile of the dungeon.

Your home in this game is the bonfire tile. This is where you’ll go when you die or voluntarily “rest.” When you are at the bonfire tile, you can spend souls to buy treasure and level up your characters, allowing you to get better equipment (which you will most definitely need).

Unlike in the videos games, you have a limited number lives, which you track with the spark dial. Every time you die or choose to rest you’ll lose a spark, bringing you that much closer to losing the game.

When you enter a room, you’ll look at the encounter card to see where to place the enemies, treasure chests, traps, and terrain. This information is always the same throughout the game, so you learn how to deal with it through trial and error.

Moving and fighting in Dark Souls is actually really simple once you understand what all of the icons mean. You can always move one node in any direction, but you can also move more if you don’t mind using some of your character’s stamina. Once you are within range of an enemy, you will roll dice based on the equipment you currently have and see if you have enough attack symbols to defeat the enemies. After a player has taken a turn, all of the enemies activate, and then the next player takes their turn.

If you are able to clear a room/encounter, you’ll gain souls. If you are killed, everyone moves back to the bonfire and all of the encounters reset. Also, just like in the video games, if you die the souls are left in that room rather than going with you to the bonfire.

The mini bosses and final bosses are a bit different than the other enemies in the game. They have their own sets of cards that tell you how they move and attack. You’ll flip one of their cards, execute their actions, and then try to move in to hit them. Each of the cards will tell you where the boss’ weak points are and where they’ll attack. Some cards have the bosses attack from a distance while others can hit multiple characters in a sweeping motion.

If you are able to defeat the big boss, everyone wins! If anyone on your team dies after your spark count reaches zero, you lose.

There is also a campaign mode that plays slightly differently than the basic game. It allows you to play through scenarios and track your progress in the back of the rulebook.

That is a very brief overview on how to play Dark Souls. If you want to see a detailed description of all of the rules, definitely check out the official Dark Souls rulebook (PDF). 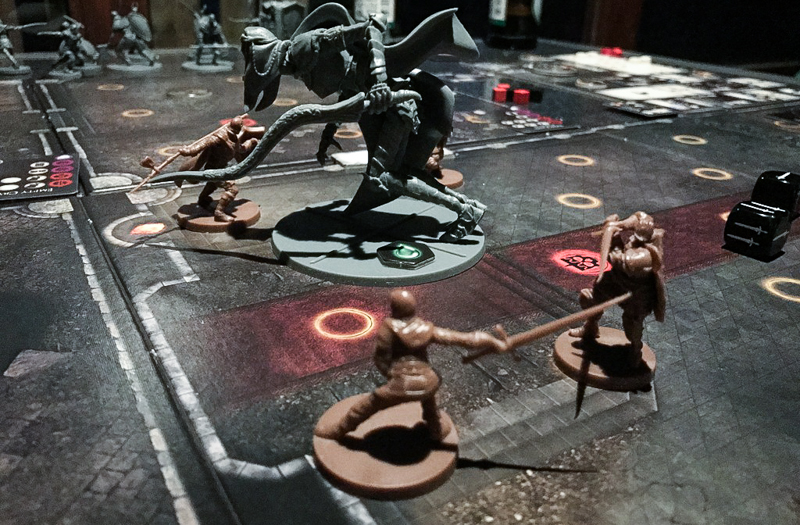 Check out Dark Souls: The Board Game at Amazon

Dark Souls: The Board Game is definitely not going to be for everyone. Some people will find it too repetitious since you do have to constantly reset the rooms and fight the exact same enemies over and over again. Some people won’t like that it can easily take over two hours to play.

That being said, chances are if you do think you’ll enjoy this game, you probably will.

In my opinion, Dark Souls is a solid dungeon crawl that is true to its source material. While it does run a bit long, I actually love the fact that, like in the video games, it feels fantastic upgrading your characters and absolutely destroying some of the enemies that killed you earlier in the game. It’s a game that I will never play solo (I have Bloodborne for that!), but I will always be happy to play it with other dungeon crawl fans who don’t mind grinding through a very tough game.

Dark Souls: The Board Game Links

Thanks for taking the time to read our Dark Souls: The Board Game review! To stay updated on all things cooperative board games, follow us on Twitter, Facebook, or via RSS.