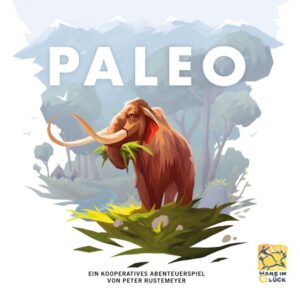 This Paleo review was made after playing the game five times (two 3-player games and three 2-player games).

Paleo is a cooperative adventure game set in the Stone Age. Your goal in the game is to keep your tribe alive by exploring, finding food, coming up with new technologies, and completing missions.

Paleo was designed by Peter Rustemeyer and is published by Hans im Glück and Z-Man Games. 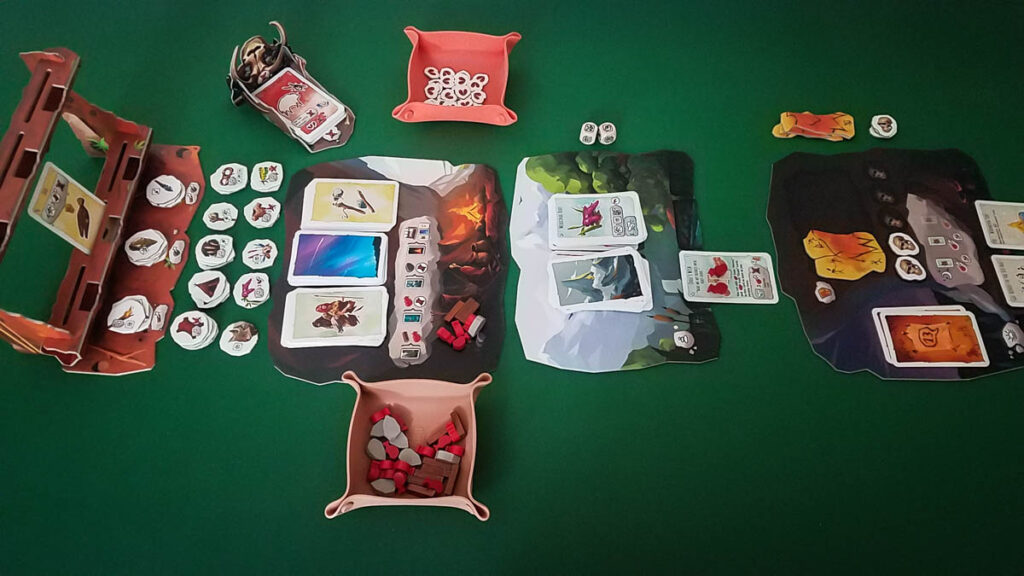 Throughout a game of Paleo, you’ll be using actions on cards to get food, find resources, create new tools, recruit people into your tribe, and a bunch of other things. Initially you won’t be able to complete the tougher tasks, but as your tribe grows you’ll be able to work toward getting the victory tokens you need to win the game.

At the start of each game, you’ll choose module decks to face. There are seven pre-made levels that combine two or three of the 10 modules, but you can also create your own. All of the modules are unique, giving you different kinds of tasks and encounters. Most of the module cards are added to the main deck, which is shuffled and dealt out to the players. Each module also has a Mission card that gives you goals to accomplish each round.

Each player starts out with two people in their group, giving them some starting abilities and possibly some starting tools. The main resources (food, wood, and stone) are shared between the players, but each player has their own deck of cards and their own tools.

Rounds have a very straightforward day/night structure. Each turn during the day, everyone simultaneously draws three cards from their decks, looks at the back of those cards, chooses one to reveal, and then performs one of the actions on the chosen card. After everyone has gone through their decks, you have to feed your people and resolve actions shown on the Mission cards (paying resources, etc.). After that, the cards in the discard piles are reshuffled, dealt back out, and you start a new round.

When you draw your three cards, the backs of those cards will give you some idea of what you’re going to be facing, but you can never be sure. For example, you know there’s a pretty good chance that you’ll find some wood and food when you choose a forest card, but you won’t know for sure until you reveal it. The red-backed Hazard cards are pretty much always bad, often leading to one of your people getting injured.

When you reveal your card, there will usually be two or more actions that you can take, including a Help action that allows you to help someone else complete their action. An action’s requirements might include having a certain number of abilities in your group, paying resources, and/or discarding a certain number of cards. When you discard cards to pay for an action, you discard them face-down (this keeps the surprise factor intact); all other discards are placed in the face-up discard pile. If you discard a red-backed card, one of your people has to take a wound. After you pay for an action, you get the rewards shown next to it.

You’ll beat Paleo by collecting five victory tokens, which are gained by resolving certain actions. You’ll lose if you ever get your fifth skull. You get skulls when people in your tribe die, when you can’t feed your people, and when you can’t resolve actions on certain cards, including the Mission cards.

For more info on how the game plays, check out the Paleo rulebook (PDF). 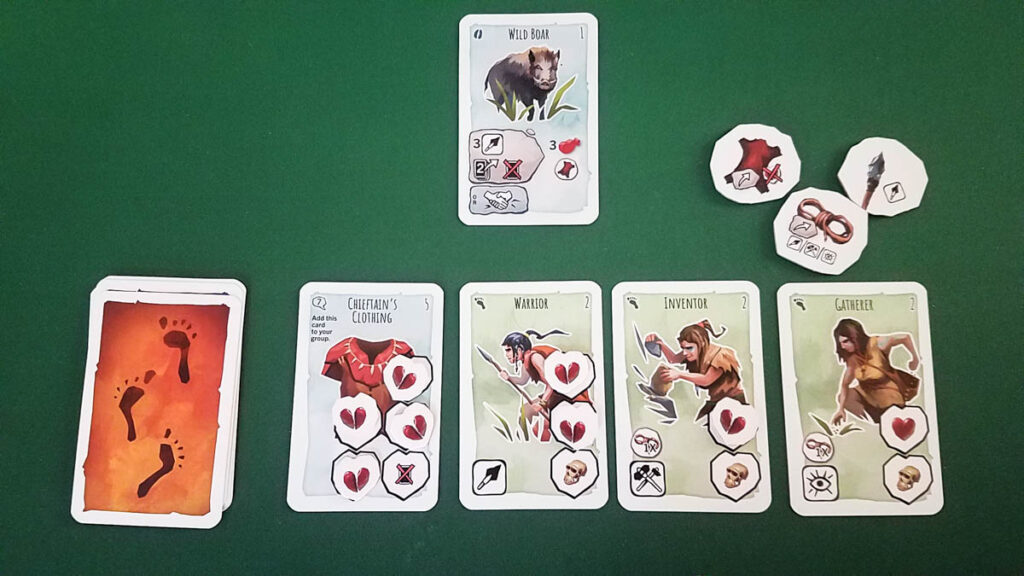 Paleo is easily one of my favorite cooperative board games of 2020. I’m a huge fan of co-op adventure games, and this is right up there with the best of them. Its core exploration mechanism is fantastic, there’s plenty of cooperation, and it has a theme that just about everyone can get into. I knew while reading the rulebook that I was going to be a fan of this one, but it’s actually better than I expected.

I think Paleo is a must-have if you usually enjoy playing cooperative games and exploration games.

Update: Paleo made it onto the Best Co-op Board Games of 2020 list!

Thanks for taking the time to read our Paleo review! To stay updated on all things cooperative board games, follow us on Twitter, Facebook, or via RSS.