Skip to content
Co-op Board GamesReviewsPolice Precinct Board Game Review 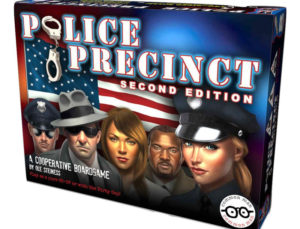 This Police Precinct review was made after playing the game six times.

What is Police Precinct?

In Police Precinct, you and your fellow cops are trying to both solve a murder and keep crime down around the city. Your main focus is on finding the murderer, but you can lose the game if crime gets out of hand.

Police Precinct was designed by Ole Steiness (Champions of Midgard) and published by Common Man Games.

Before you start playing Police Precinct, you will need to pick a character, who will have his or her own stats and unique special abilities to use throughout the game. You will also get a couple police cards that will help you on your mission.

The stats on your character card will tell you how many dice you use when performing actions or how many cards you can draw. You can add to this by having other cops with you at a location and/or by using cards with the correct symbol on them.

You can do exactly four things on each turn: move your car, do an action, draw a police card, and then draw an event card. Some cards and abilities allow you to do special actions on your turn. 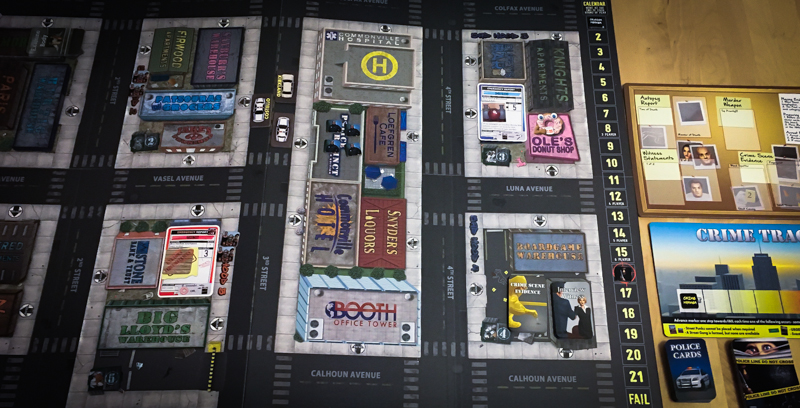 You have quite a few actions to choose from. You can investigate the murder, arrest street punks, take care of emergencies, and even upgrade your character’s abilities. It’s always a good idea to perform actions that you are best at doing, but sometimes you are pretty much forced to take care of something before/when it gets out of hand.

You are hoping to find evidence when you are doing your investigations. These evidence cards will be placed on the Investigation Board as the game moves along. Your goal is to fill up this board so you can catch the murderer.

You also have the option to play Police Precinct with a “dirty cop,” but we haven’t used that variant yet. It does seem interesting, though, because it adds bluffing to the game and it probably adds even more tension.

If you love the idea of playing a co-op game with a police theme, then chances are you will be very happy with Police Precinct. It’s not going to make it onto our top family games list, but it’s easy to see why so many people love it as a family game.

We see this as a slightly above-average co-op game, but we’re still going to keep it since it’s the only police-themed board game that we have and it presents a good challenge.

If you want to test out the game, be sure to check out the Police Precinct app for iOS and Android.

Thanks for taking the time to read our Police Precinct board game review! To stay updated on all things cooperative board games, follow us on Twitter, Facebook, or via RSS.