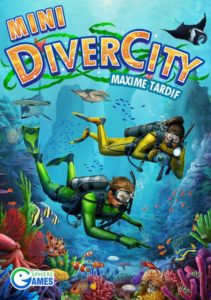 This Mini DiverCity review was made after playing the game 10 times. We were sent a copy of this game by the publisher in exchange for an honest review.

What is Mini DiverCity?

Mini DiverCity is a limited communication card game in which you’re attempting to convince the government to turn your city’s coral reef into a national park rather than letting corporations take it over. Similar to Hanabi, players can never look at the cards in their hands and they can’t talk about strategies.

Mini DiverCity was designed by Maxime Tardif and is published by Sphere Games. 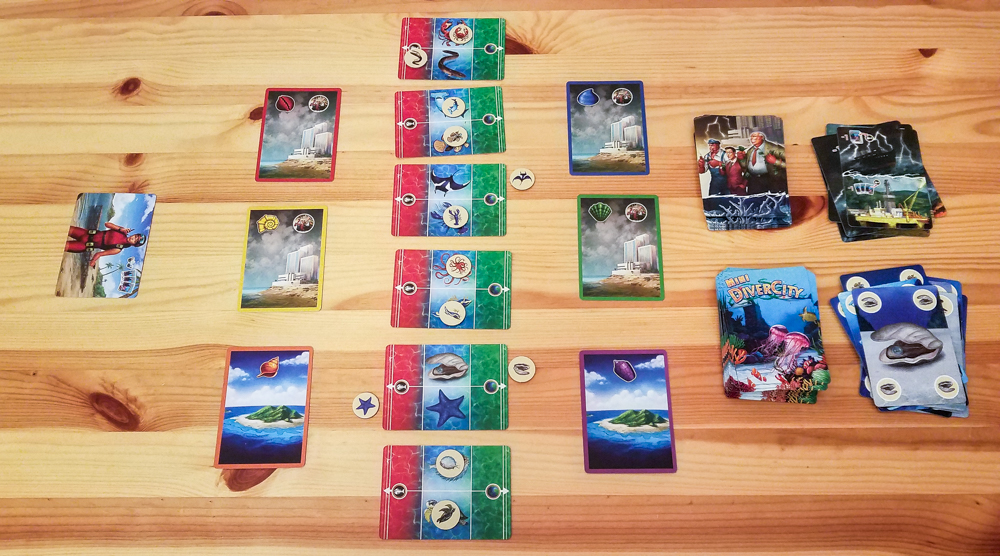 Mini DiverCity is all about trying to keep species from going extinct as corporations are attempting to use the area’s natural resources for their own gains. You want to be proactive as much as you can to help the species survive, but often you have to react to what the corporations have done.

Everyone will have hands of Species cards, but the cards will be facing the other players (à la Hanabi). No one will know what they have unless they play cards blindly or they get help from their teammates.

There are six Species Scale cards, each with two of the 12 species on them. Throughout the game the species’ tokens will be moved based on what the players and the corporations do. The tokens can be moved as long as they are in the red, blue or green zones on their cards, but no one can move them once they’ve gone extinct or have been saved.

There are four types of Corporation cards that might be drawn during the Corporation’s turn:

During the Diver’s turn, the active player can take one of these three actions:

Each player will also have a one-time-use Diver Card that they can use during one of their turns. These are special actions that range from saving species to looking at your hand of cards for free.

My group seems to really enjoy these types of games, so I’m not surprised that we’ve had a good time playing Mini DiverCity. I prefer some other limited communication co-ops over Mini DiverCity—specifically Cahoots, Codenames Duet, and Hanabi—but I’ll still be keeping it in my collection since it does have a unique feel to it. It’s quick, it’s very challenging, it has great art, and it has a pretty cool theme, so plenty of people will be satisfied with this one. Oh, and if you like solo games, you should definitely check out Mini DiverCity because its solo mode is excellent.

Thanks for taking the time to read our Mini DiverCity review! To stay updated on all things cooperative board games, follow us on Twitter, Facebook, or via RSS.