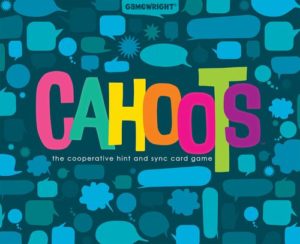 This Cahoots review was made after playing the game about 25 times. We were provided a copy of this game by the publisher in exchange for an honest review.

Cahoots is a limited communication cooperative card game in which you’re attempting to complete a series of goals by matching colors and numbers. The game was designed by Ken Gruhl and is published by Gamewright. 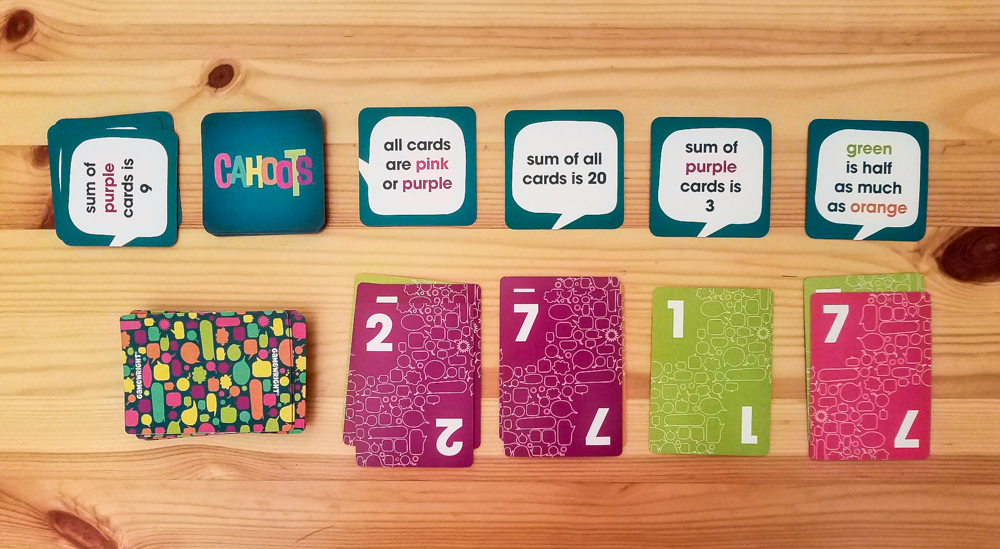 There are two decks of cards in Cahoots: the number cards and the goal cards. You’ll make a deck of goal cards based on how difficult you want the game to be; for example, you’d use 18 of the 50 goal cards if you want to play at Normal difficulty in a two or three-player game. To complete setup, you’ll place four number cards on the table and the first four goal cards above them. If you’re lucky, one or more of those four initial goals will be completed before anyone even plays a card.

On your turn, you play one number card to one of the four piles on the table. Your card has to match a pile’s number and/or color. If you complete one or more goals, you’ll place those goal cards aside and draw new goal cards. After you’ve placed your card and completed any goals, you’ll draw back up to four cards.

This is a limited communication game, so there are limits to what you can say to your teammates. You can’t talk to them about the cards in your hand, but you can tell them about any goals that you’re going for or piles that’d you’d like to play to on your next turn.

You’ll win the game if you’re able to complete all of the goals. You’ll lose if you run out of number cards or if a player can’t legally play on their turn.

Cahoots is a fantastic little card game and one of my group’s favorite limited communication games. It’s a light game that feels familiar, but it’s also a unique experience that has been a hit with just about everyone I’ve played it with. It feels great when you’re able to play a card and complete multiple goals, and the close losses make you want to quickly set it back up and play again. It’s a simple-yet-clever design that should go over well with most crowds.

If you enjoy playing limited communication co-op games like The Mind, Codenames Duet, The Ravens of Thri Sahashri, and Mysterium, you should definitely check this one out. If you don’t like those types of games or you simply don’t want to add another light game to your collection, then Cahoots might not be for you. I know from firsthand experience that it works brilliantly as a pub game, and it should work just as well as a family game.

Update: Cahoots made it onto our Best Family Games list!

Thanks for taking the time to read our Cahoots review! To stay updated on all things cooperative board games, follow us on Twitter, Facebook, or via RSS.