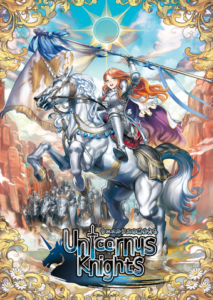 This Unicornus Knights review was made after playing the game four times.

Unicornus Knights is a cooperative fantasy board game in which you play as Kingdom characters attempting to clear a path for a princess as she tries to take back her capital from the Empire. The game was designed by Seiji Kanai (Eight Epics) and Kuro (The Ravens of Thri Sahashri), and it is published by AEG. 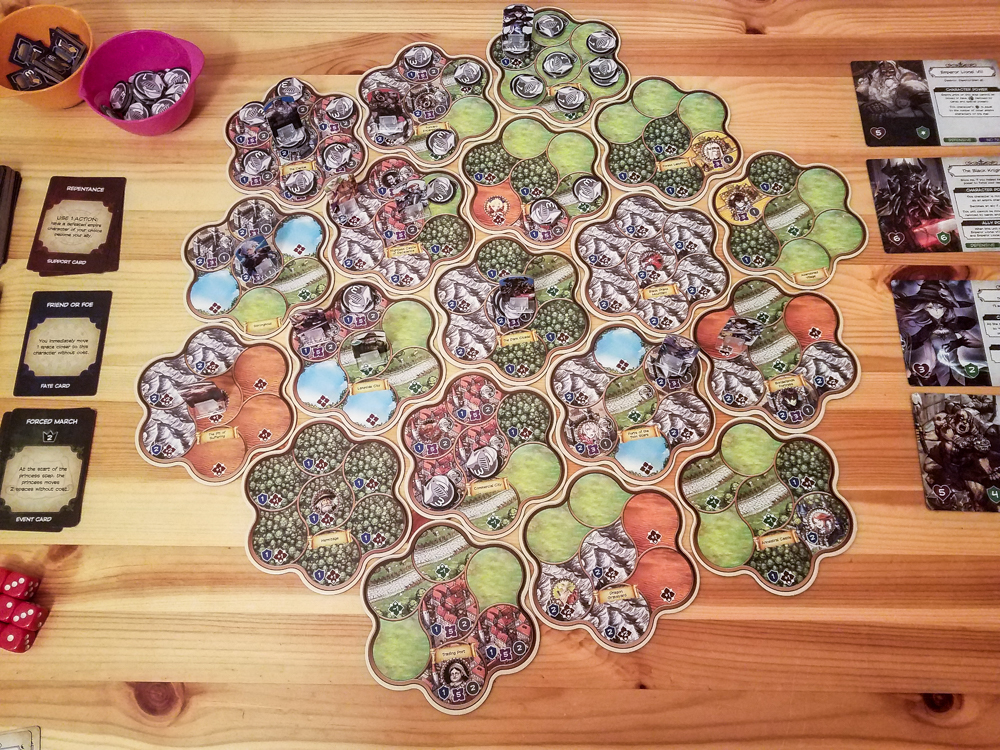 Unicornus Knights is played over 10 rounds. Players need to keep the princess alive and help her make it to the capital city before the end of the tenth round. Interestingly, in most games the princess will be moving on her own, so you have to make your Kingdom characters clear a path so she doesn’t take too much damage.

An event card is drawn at the start of each round, some of which have instant effects and others have ongoing effects. The events can help or hinder the Kingdom characters.

After the event card has been resolved, all of the player-controlled Kingdom characters take their turns. You’ll have a set amount of actions you can take on your turn depending on the number of players. You can move around the map, recruit soldiers, collect resources to feed and arm your soldiers, send soldiers or resources to other characters (including the princess), and draw support cards. You can also use support cards and your character’s special powers on your turn.

Whenever your character moves onto a space that has an enemy on it, a battle takes place. You’ll roll a number of dice equal to the number of soldiers you have and looks at the the chart on your character card to see which results were hits and which were misses. If you’re fighting an Empire character, you’ll first assign dice to any soldiers with them and then assign your other dice to the character. You’ll take one point of damage for each “loss” die (usually 1s and 2s) that you’ve assigned and for any unopposed enemy. You can choose to assign that damage to your character and/or to the soldiers with your character.

If your character dies, you’ll lose all of their active support cards and resources, but you get to keep the support cards in your hand. At the start of your next turn, you take an unused character and keep playing. 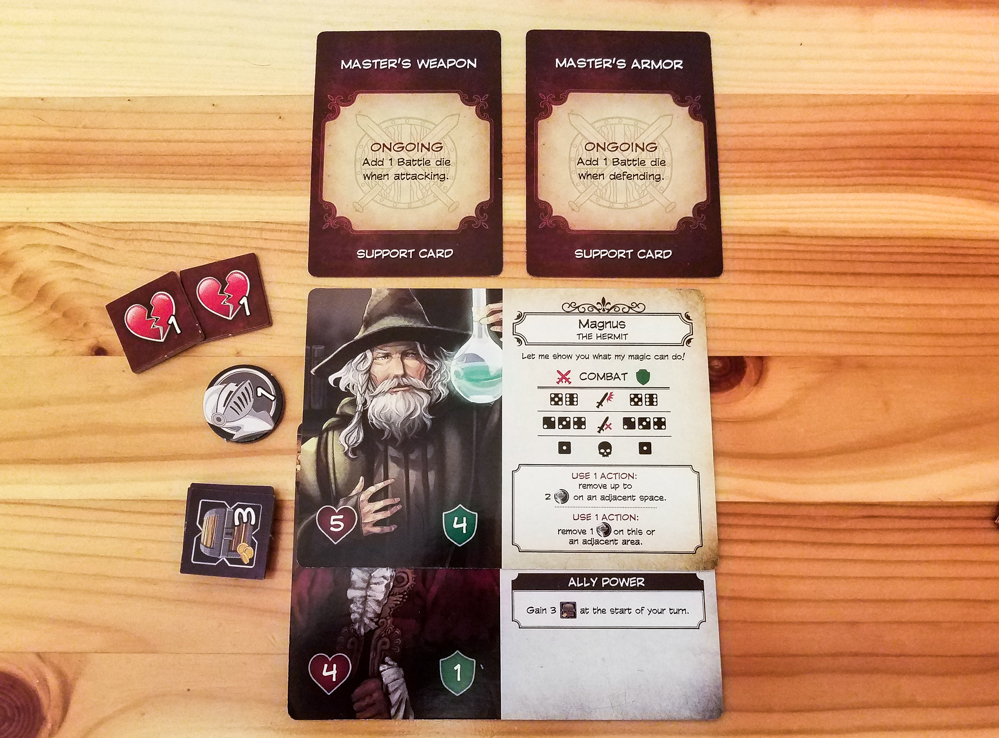 After all of the Kingdom characters have taken their actions, the princess takes her turn. She gets three actions and she either moves or collects resources. She’ll always try to take the quickest route to the capital, so she’ll go into an enemy’s space and battle if it’s in her way. The princess always destroys the enemy in battle, but she also takes damage equal to the enemy’s health plus the number of soldiers they currently have with them.

Fate cards are another important part of Unicornus Knights. These cards come into play whenever a character moves into an area with an opposing character or when two opposing characters end up adjacent to each other. When either of those things happen, a fate card is drawn and those two characters are now considered “bound by fate.” Some of the fate cards have instant effects, some will have ongoing effects, and others will tell you what you need to do once the Empire character has been defeated. Often this leads to an Empire character joining up with a Kingdom character as an ally, giving them new special abilities.

And that’s about it. You’ll be trying to figure out which enemies to target while also paying attention to where the princess will be moving on her turn. You don’t necessarily have to kill a bunch of the Empire characters, but the emperor—the guy who took the capital from the princess’ family—gets weaker as he loses troops, so it’s usually a good idea to take out the majority of them. Plus, they can become your allies and make you stronger.

The updated Unicornus Knights rulebook is on BGG if you’re interested in seeing all of the rules for the game. 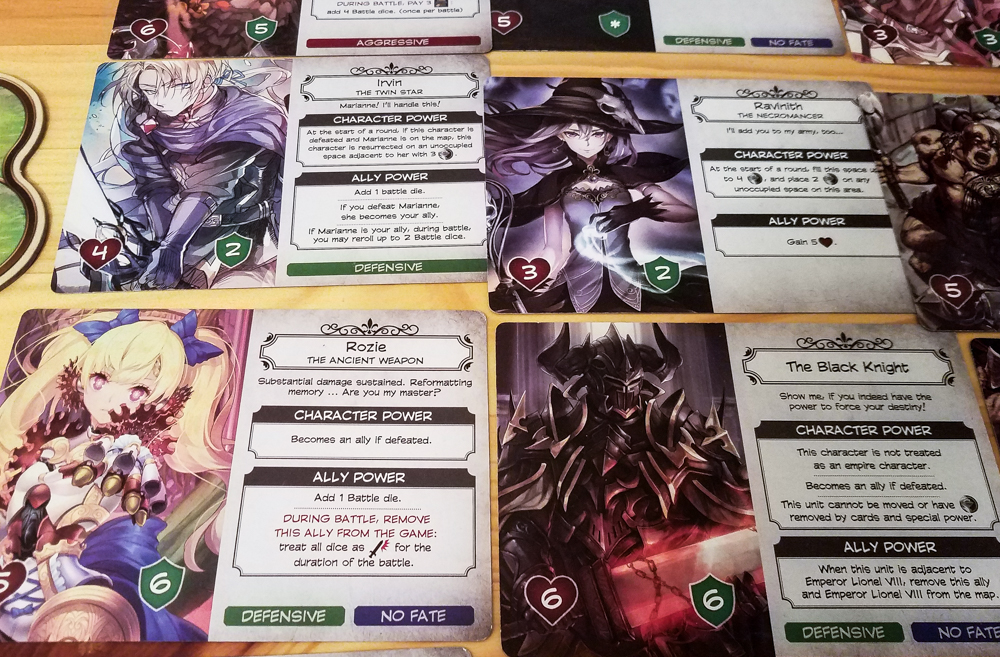 I really like Unicornus Knights. It’s kind of a tough game to get to the table because of the long setup time, but it’s been a consistently fun experience. All of the characters are interesting in their own ways and each game tells a slightly different story.

This is usually where I compare the game I’m reviewing to other similar games, but I can’t do that with Unicornus Knights because it is such a unique game. I’d say if you like the idea of working together to escort a princess while fighting off some nasty enemies, this is a game you’ll probably enjoy. I don’t recommend it as a two-player game, though.

Thanks for taking the time to read our Unicornus Knights review! To stay updated on all things cooperative board games, follow us on Twitter, Facebook, or via RSS.