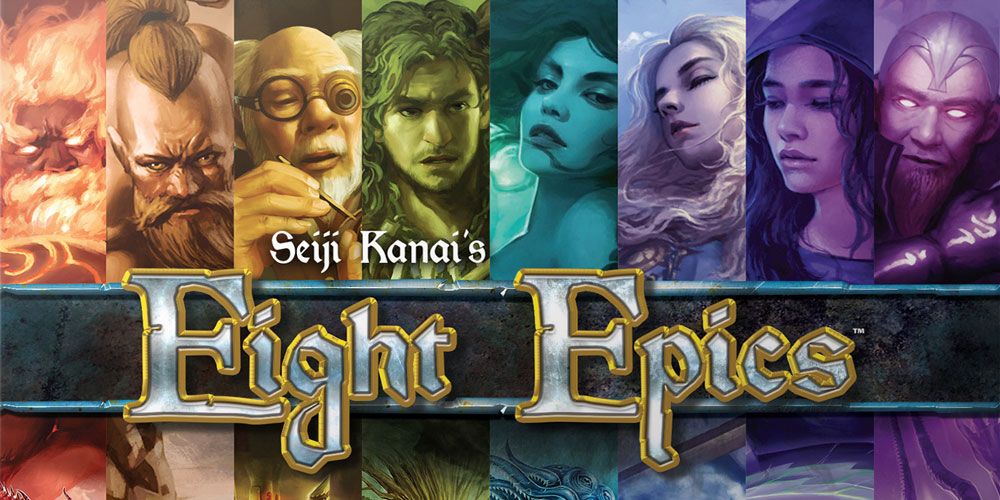 This Eight Epics review was made after playing the game six times.

What is Eight Epics?

Eight Epics is a cooperative dice rolling game designed by Seiji Kanai (of Love Letter fame) and published by AEG. In this game, you and your teammates are trying to use your heroes’ powers to take care of threats that are happening all over the world. Every threat will have multiple challenges that you will need to complete before you are able to move on to the next.

Throughout the game, you will be attempting to match the dice to the challenges listed on the threat cards. For example, you might have to have a total of 32 or more pips showing on six dice to complete one of the challenges. How do you do that? Well, you roll the dice at the beginning of each round and then adjust them by rerolling and using the heroes’ powers.

During your turn, you will select one of the heroes to use, which can be yours or one of the heroes in the middle of the table. You can then reroll up to three of the dice Yahtzee-style, keeping one and rerolling the others if you so choose. You can also use the power of the hero you selected for that turn, which can help you to manipulate the dice, heal other heroes, and other cool stuff.

Rerolls and hero powers cost life points. You can use these abilities as much as you want to on your turn as long as you have enough life points to do so. If your hero ever runs out of life points, you can keep playing but you can only use the other heroes.

Once your turn is over, you have to turn that hero’s card sideways to show that it can’t be used again until the current threat is beaten. The trick to the game is using the right powers at the right times to beat the threats as quickly as possible.

In the newest version of Eight Epics, you can also use event cards once you’re used to the game. These cards make each threat a bit tougher, but they also give you new abilities once you get past the threats that the events affect.

If you and your teammates are able to take down all of the threats, everyone wins! If all of the heroes are killed before that happens, yep, you lose.

Check out Eight Epics at Amazon

If you’ve ever wanted to play cooperative Yahtzee with a theme, Eight Epics might just be the game for you (don’t worry, it’s not really a Yahtzee game). It’s short, challenging, and inexpensive, so it’s a game you might want to check out even if you’re on the fence about it. Oh, and it’s a good solo game, too.

I like Eight Epics a lot, but some people in my group lost interest in it after we played it about eight times. For now, it’s a game that we’ll be keeping, but it will probably only hit the table once every couple of months.

Thanks for taking the time to read our Eight Epics review! To stay updated on all things cooperative board games, follow us on Twitter, Facebook, or via RSS.