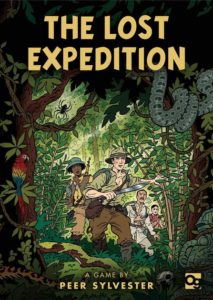 This Lost Expedition review was made after playing the game eight times.

What is The Lost Expedition?

In The Lost Expedition, you will be playing as three explorers attempting to find El Dorado (aka the lost city of Z). Along the way you’ll be dealing with different types of encounters, hoping to make it to the end of the trail. This game can be played solo, co-op, or as a two-player competitive game.

The Lost Expedition was designed by Peer Sylvester and published by Osprey Games. 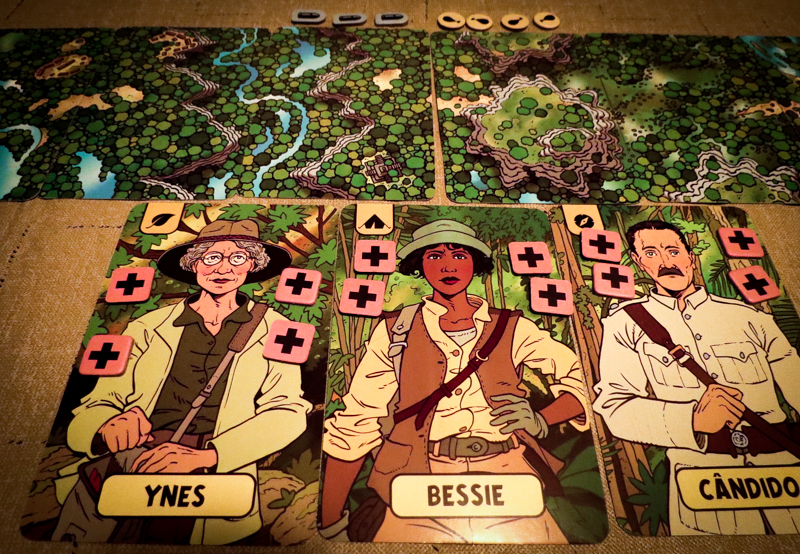 I’m only going to go over the cooperative mode in this gameplay overview, but there are only slight changes that need to be made when playing the other modes.

I’m only going to go over the cooperative mode in this gameplay overview, but there are only slight changes that need to be made when playing the other modes.

To set up the game, you will place your three explorers out on the table and give them their health tokens. You’ll also lay out 7-9 expedition cards, which represent the distance you’ll have to go to reach El Dorado, and place your team’s meeple on the first card. You will also get some starting food and ammunition.

The Lost  Expedition is very easy to learn once you understand all of the cards’ symbols. That’s actually not too tough to do since there are a total of 12 symbols in the game. When these symbols are filled in / black, that means you’ll gain those items. When they’re not filled in, you’ll have to spend those items.

As you move through the jungle, you’ll have to respond to symbols on each adventure card, usually by paying with your resources or discarding an expertise card. The adventure cards have one or more of these boxes on them:

The resources in the game are food, ammunition, and health. Food is needed to feed your explorers in the mornings and evenings. Ammunition is used to fight off the animals you’ll run into in the jungle. You need your health to stay alive!

There are also four Path symbols, which affect the adventures cards in different ways. These symbols can be used to skip cards, swap cards, remove cards, or even add cards to the path. Part of the strategy in this game is knowing how to line up the cards in a way that allows you to skip or remove the toughest ones.

The last two symbols you’ll see are the Advance and Death symbols. Advance is extremely important because it allows you to move closer to El Dorado. The Death symbol instantly kills one of your three explorers. 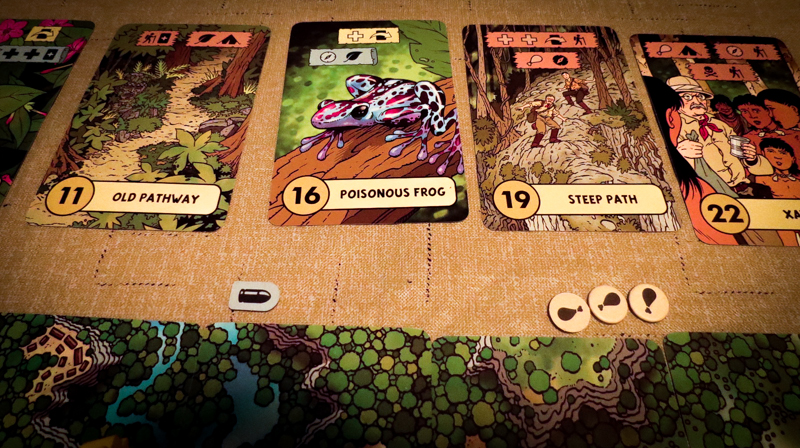 During the Morning phase of a round, you will be playing adventure cards from your hand to the path. The first player will play their card, then the next, and so on. In this phase, the cards are kept in numerical order. After that, you’ll simply go through the adventure cards, responding to the Events, Choices, and Options.

The Night Phase is exactly like the Morning phase except that the cards will stay in the order in which they’re played.

Players can talk about how they want to approach each phase, but they can never talk about the cards in their hands. The key is to keep your resources (including your health) as high as you can as you move closer to El Dorado.

If you make it to the lost city, you win! If all three of your explorers die or you go through the adventure deck twice, everyone loses. 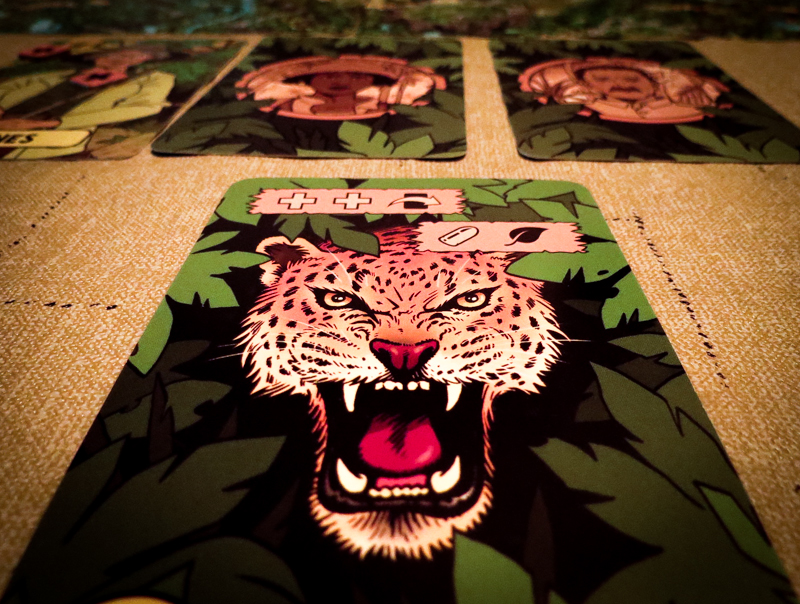 Check out The Lost Expedition at Amazon

The Lost Expedition is definitely a keeper. It’s a relaxing adventure tabletop game with a clever resource management mechanism. Solo gamers will probably love it, co-op fans will definitely like it, and its head-to-head mode is nothing to sneeze at, either!

If you’re looking for a quick adventure game to add to your shelf, definitely check out The Lost Expedition. It’s a simple game to understand, but I have a feeling it will take a while to master.

Thanks for taking the time to read our The Lost Expedition review! To stay updated on all things cooperative board games, follow us on Twitter, Facebook, or via RSS.