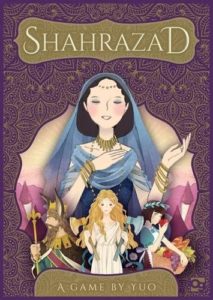 This Shahrazad review was made after playing the game six times. We were sent a copy of this game by the publisher in exchange for an honest review.

Shahrazad is a solo or two-player pattern building game designed by Yuo and published by Osprey Games. Your objective is to help Shahrazad tell a great story to the king by connecting tiles in a way that makes sense. The better your story, the more praise/points you will receive from the king!

I’m going to be giving you an overview of the rules for the two-player cooperative game. The rules are pretty much exactly the same for a solo game except that the solo player will be taking all of the turns and the scoring goals are a bit different.

You have 22 story tiles to work with in Shahrazad, numbered 0 through 21. Each tile has three bits of information: Its number, its color, and all of the other tiles that share its color.

To begin the game, one tile will be placed in the center of the table and both players will get their first two tiles. That’s it! Now you’re ready to go!

On your turn, you will either place a tile on the table or you will replace a tile. After you do one of those two things, you draw one new tile and your partner takes his or her turn.

To place a tile, you add it above, below, or to the side of one of the other tiles. When adding to a row, you will place it halfway up or down one of the tiles on the table. In a two-player game, the columns can only be three tiles high, and they can be four tiles high in a solo game. Ideally, you want to keep the tiles in sequential order going from left to right (you’ll see why when we go over scoring).

If you choose to replace a tile, you swap a tile on the board with one from your hand. You still draw a tile at the end of your turn, but you now have to place two tiles on your next turn. 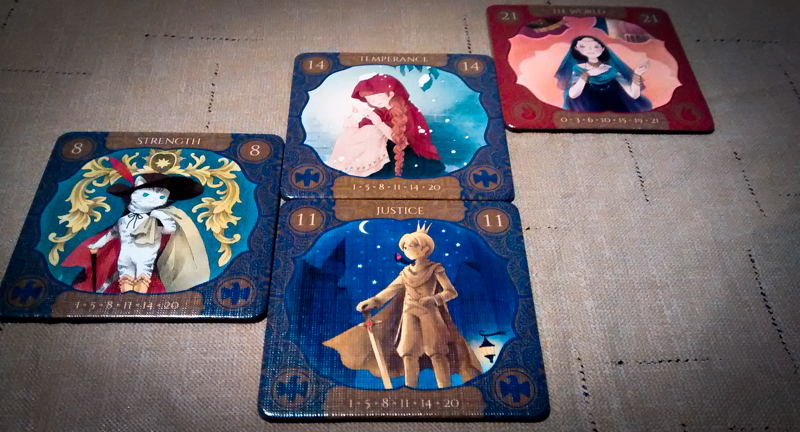 After you’ve placed all of the tiles in the first round, it’s time to find out how well your story is going!

When scoring, the first thing you’ll need to do is check to see if any tiles are higher than tiles on their right-hand side. If they are, flip the higher-numbered tiles.

Next you’ll want to check that all tiles form sequential paths going from the far-left column to the far-right column. If any of the paths have gaps or flipped tiles in them, all of the tiles along that path get flipped.

To get your score for the first round, find the largest group of each of the four colors and give yourself a point for each of those tiles. Subtract a point for every gap found in the columns and every card that was flipped.

Once you’ve played through the second round, you’ll score the tiles the exact same way as you did at the end of the first round.

The game comes with two scoring tiles that you can use to keep track or your score and to find out how much the king liked your story. 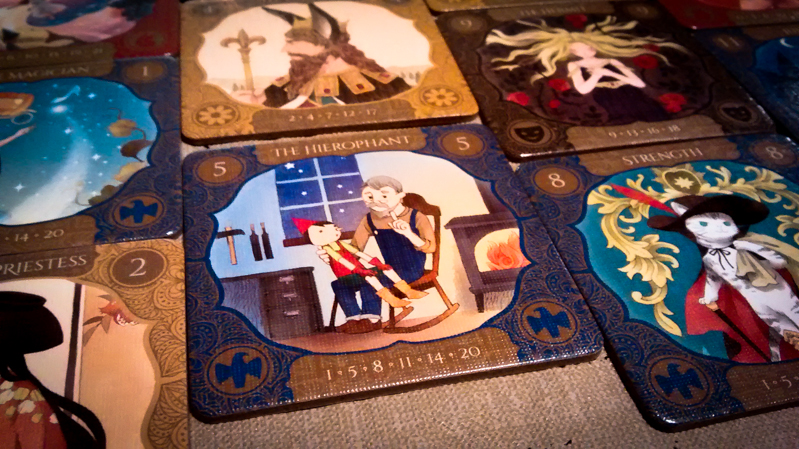 Check out Shahrazad at Amazon

To me, Shahrazad is a keeper because it’s simple to setup and play, it looks great, and it’s challenging without being frustrating. It’s one of those tabletop games that I can grab from the shelf anytime I want to get a quick solo game in, or when I want a quick co-op filler game that a friend and I can play.

If you enjoy solitaire games, you definitely want to get Shahrazad. If you’re looking for a shorter two-player cooperative game, chances are you’ll love having this one in your collection. I’ll also add that you should get this if you collect beautiful board games because this one definitely fits in that category as well.

Thanks for taking the time to read our Shahrazad review! To stay updated on all things cooperative board games, follow us on Twitter, Facebook, or via RSS.