This Robinson Crusoe review was made after playing the game six times.

What is Robinson Crusoe?

Robinson Crusoe: Adventures of the Cursed Island is a cooperative adventure game that shipwrecks players on a deserted island. Besides the more common survivor necessities (shelter, food, weapons), players will also learn through their decisions, and discoveries, that this island has many mysteries to throw at them.

Robinson Crusoe was designed by Ignacy Trzewiczek and it’s published by Portal Games. 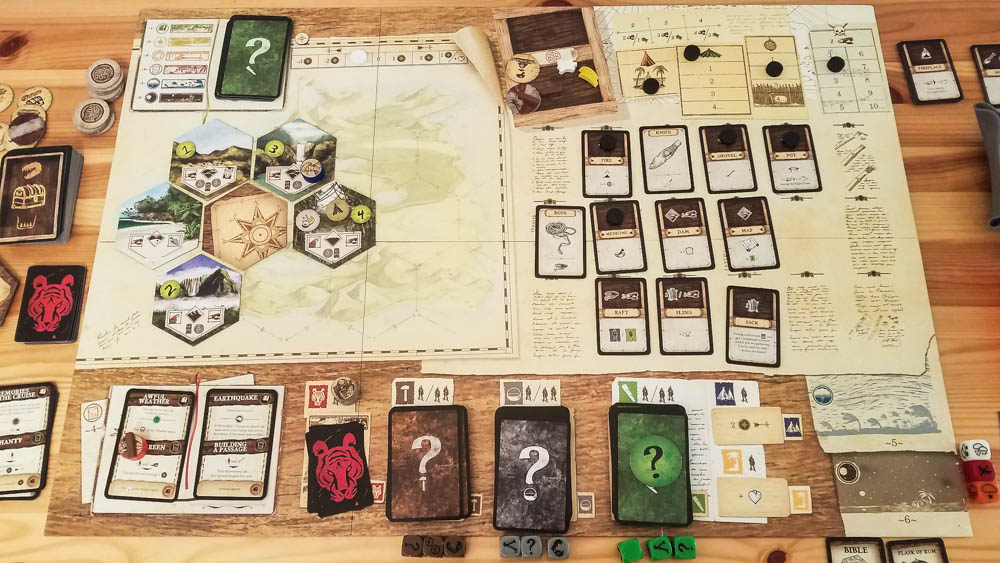 There are many steps that go into setting up Robinson Crusoe, but the most important one is choosing one of the six scenarios (seven scenarios in the newest edition). Each scenario plays quite differently and comes with its own set of unique objectives.

When getting ready to play Robinson Crusoe, players can choose to be the cook, the carpenter, the explorer or the soldier. Each character plays a bit differently since they have different morale/life tracks, special abilities and starting equipment. The team also has its own morale track that can make the game harder if it’s too low, or help players use their abilities if it is kept up.

There are six phases in each round of the game: Event, Morale, Production, Action, Weather and Night. Three different sets of dice are used for each of the three actions in the game (building, gathering, and exploring). The dice will tell you if an action is successful (success, wound, or adventure) or not.

The Building action is extremely important in this game. You have to build camps to avoid taking damage from the elements, you build up your weapon strength to be able to handle the animals that you encounter, and you have to build other items to help you stay alive on the island.

Players make their own choices while playing Robinson Crusoe, which makes the game unique and difficult to master. For example, one day you might choose to move to a different part of the island and fight a bear, while on another day you will focus on getting the team’s morale up.

If one player succumbs to their wounds during the game, then the whole team has lost. You also lose when you are unable to complete your chosen scenario’s objectives in time.

That is just an overview of how to play Robinson Crusoe. If you want to read all of the rules, check out the official Robinson Crusoe rulebook (PDF). 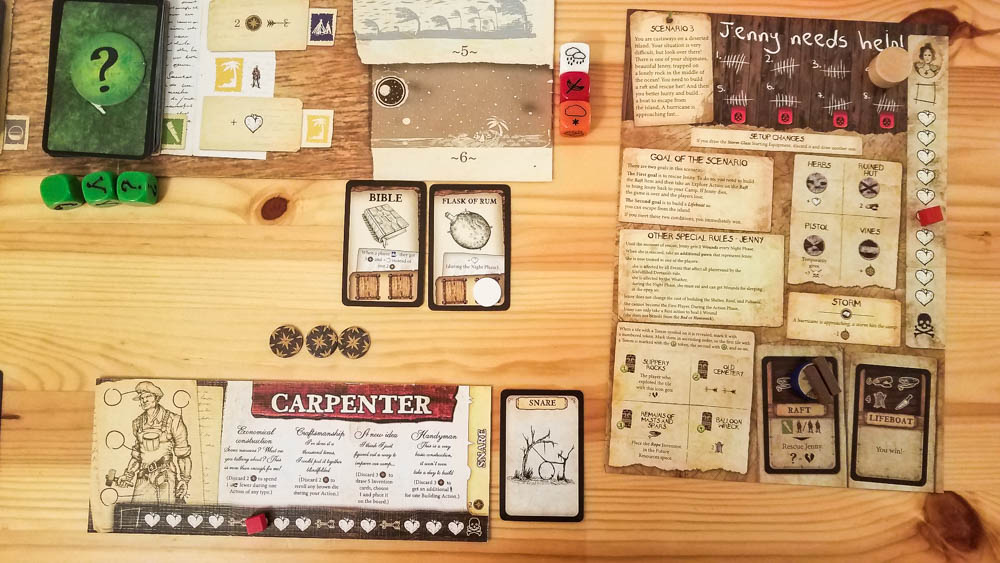 It might not be the best choice if you are new to cooperative board games, but Robinson Crusoe is a wildly entertaining game for those that give themselves some time to become familiar with it. It’s actually my group’s favorite co-op board game right now, so that should tell you how much we like it.

Anyone who likes survival and/or adventure game should love what this game offers. You really do feel like you’re on a mysterious island and everyone has to work together to survive. This makes Robinson Crusoe a great deal of fun and certainly a game that you should consider adding to your collection. I never knew I needed a Robinson Crusoe board game in my life, but I am very glad that I randomly decided to give this one a try a few years ago!

Update: Added images from the newest version of the game and updated all links.

Thanks for taking the time to read our Robinson Crusoe board game review! To stay updated on all things cooperative board games, follow us on Twitter, Facebook, or via RSS.