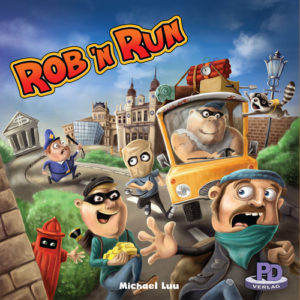 This Rob ‘n Run review was made after playing the game eight times.

Rob ‘n Run is a cooperative heist game in which you use tools and teamwork to crack some safes and, hopefully, escape the police. The game was designed by Michael Luu and is published by Rio Grande Games. 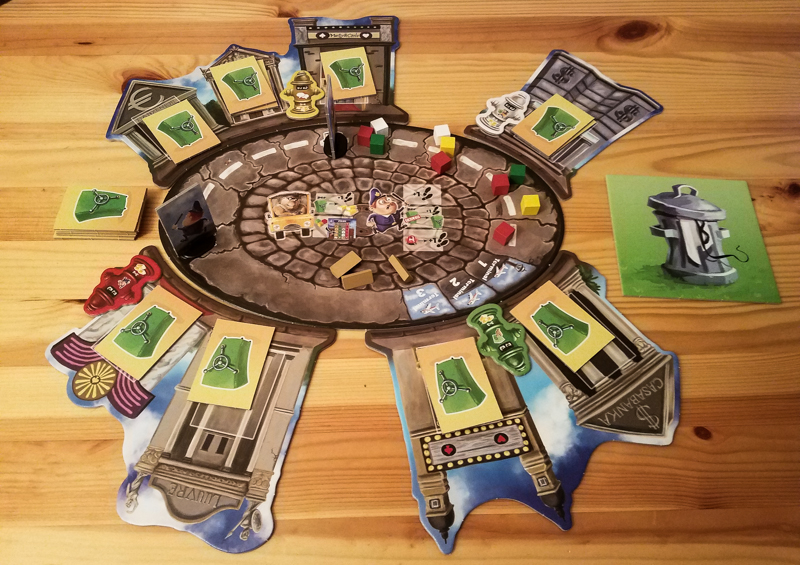 During each robbery attempt in Rob ‘n Run, one player will act as the boss and will give the other players clues about the tools they’ll need to crack the current safe(s). The crew members then give the boss tool cards in hopes of matching the tools found on the boss’ safe card(s). After the attempted robbery ends (successfully or unsuccessfully), the next player will become the boss and you try to crack more safes.

There are four different alarms located on the Police Station card. The yellow alarm shows how many clue cards (out of six) the boss can use during the current robbery attempt. The green alarm tells you how many tool cards players get. The white alarm indicates how many tool cards the crew members will collectively give to the boss each round. Finally, the red alarm indicates how many incorrect tools can be handed to the boss before the robbery attempt ends.

As you rob different buildings and move towards your escape, you’ll be adding cubes to the different alarms. As cubes are added, the game becomes more difficult because you’ll have fewer clues and tool cards to use, and you can’t make as many mistakes.

There are four “quarters” surrounding the board, each of which has 1-3 buildings. When you are able to clear all of the buildings’ safes from one of the quarters, you’ll have a chance to pay the dealer hiding out there so you can take some of the cubes off of the alarms. 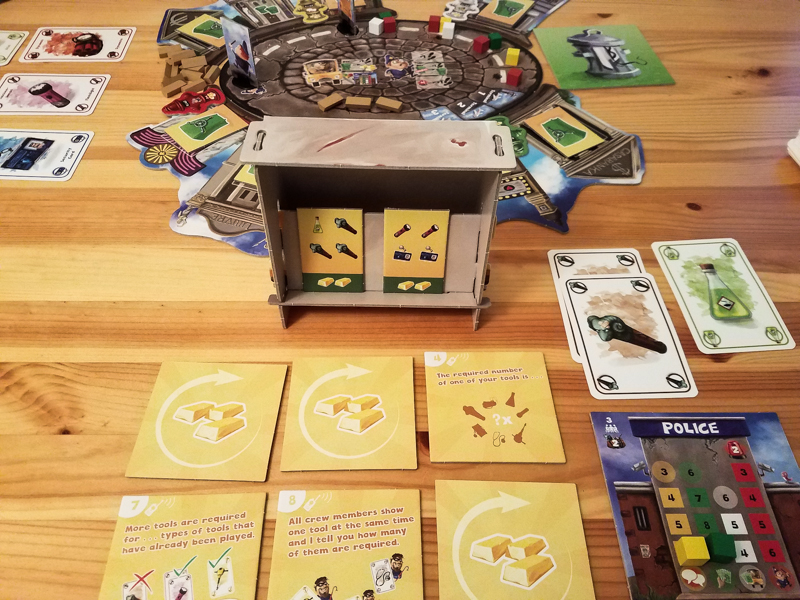 During the Clue Phase, the current boss gives the crew members as many or as few clues as he or she wants to. They keep the safe cards behind the screen and have to find a way to explain the tools that are needed using clues on the cards in front of them. Once a clue has been used, that clue card is flipped over and can’t be used again during the current round unless the boss chooses to spend three gold to flip one back over.

During the Crew Phase, crew members play tool cards face-down until they have the number of cards indicated on the white alarm. In turn order, players play one card, get a new hand of cards, or pass. Players aren’t supposed to talk about what they have in their hands or the cards they’ve turned in.

During the Alarm Phase, the boss will shuffle and check the tool cards that the crew members played. Correct tools are placed face-up so all players can see them. Incorrect tools are set aside in the face-down “alarm stack.” If the safes have been successfully cracked and/or there are too many cards in the alarm stack, the round ends. Otherwise, a new round begins starting with the Clue Phase. 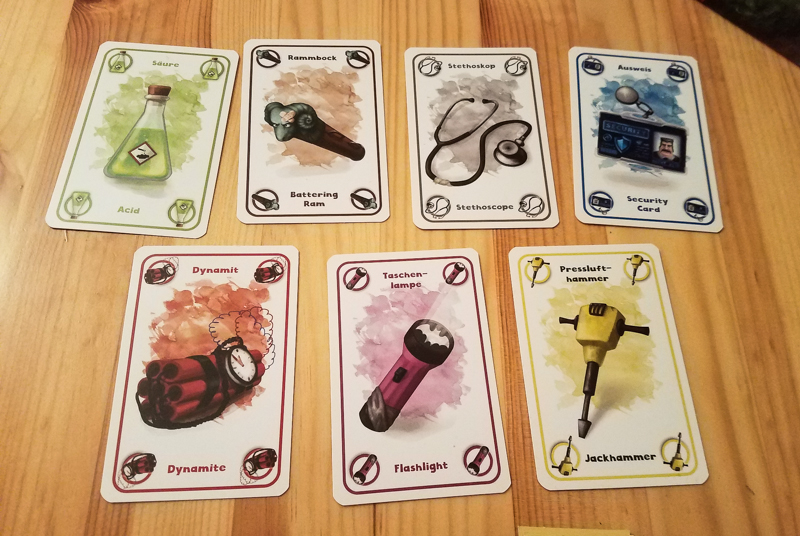 After a successful robbery, you’ll move closer to the escape; one spot for one cracked safe, two for two safes. The police will always move one spot, but they’ll move an additional spot for each uncracked safe and one more if the red alarm was triggered.

The safe cards tell you how much gold you’ll receive for successfully cracking them. The gold can be used to pay off dealers and to use inactive clue cards, but the more gold you have at the end of the game, the better you did.

If the police ever reach your car, everyone loses. If you make it to any of the terminal spots without being caught, you win!

The two-player game is a bit different than at the other player counts. The main difference is that the crew member player gets to draw back up to his or her hand size (indicated on the green alarm) every round. With more players, you can only add more cards to your hand if someone plays a “bag” card. 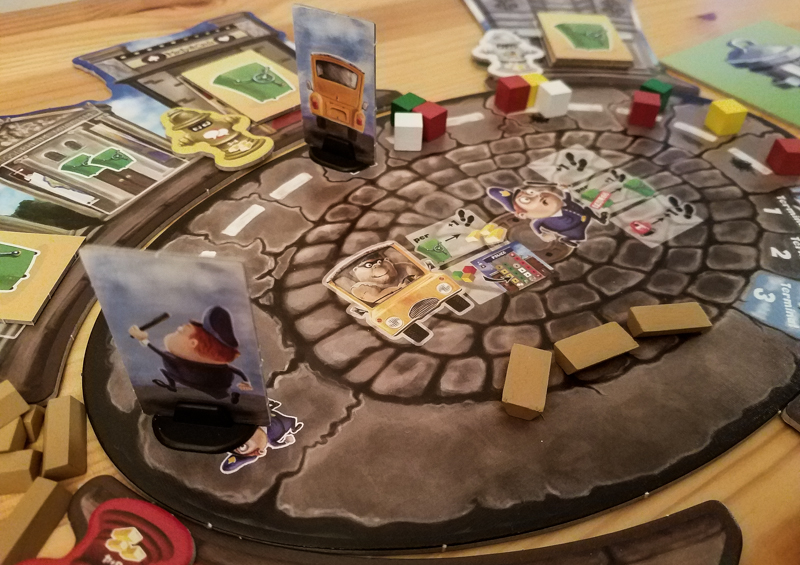 I have to be honest, when I opened the Rob ‘n Run box for the first time, saw the components and read the rules, I didn’t have super-high expectations. Well, it’s actually a very entertaining game and it’s quite different than any other co-op I’ve played. It’s kind of like a mix of Burgle Bros. and Codenames, but it has its own unique feel. The boss and crew member roles are both great and it’s a lot of fun trying to work with your teammates with limited communication.

My group still prefers Burgle Bros. and Professor Evil and The Citadel of Time when we have the heist game itch, but Rob ‘n Run will definitely be staying in the rotation because it has that deduction element that everyone in my group seems to love.

If you don’t mind the bad-guy heist theme, I definitely recommend checking out Rob ‘n Run. You should probably avoid it, though, if you don’t like the theme or you play most of your co-ops as two-player games.

Thanks for taking the time to read our Rob ‘n Run review! To stay updated on all things cooperative board games, follow us on Twitter, Facebook, or via RSS.