This Pathfinder Adventure Card Game review was made after playing the game six times. Updated in 2019 following the release of the new edition/core set.

What is Pathfinder Adventure Card Game?

In Pathfinder Adventure Card Game, you and your fellow adventurers will be going through a number of scenarios trying to defeat bosses and upgrade your characters’ abilities and gear. This is a highly expandable campaign game, so there are plenty of adventures to go on and a ton of different cards to add to your decks.

Pathfinder Adventure Card Game was designed by Mike Selinker and is published by Paizo Publishing. 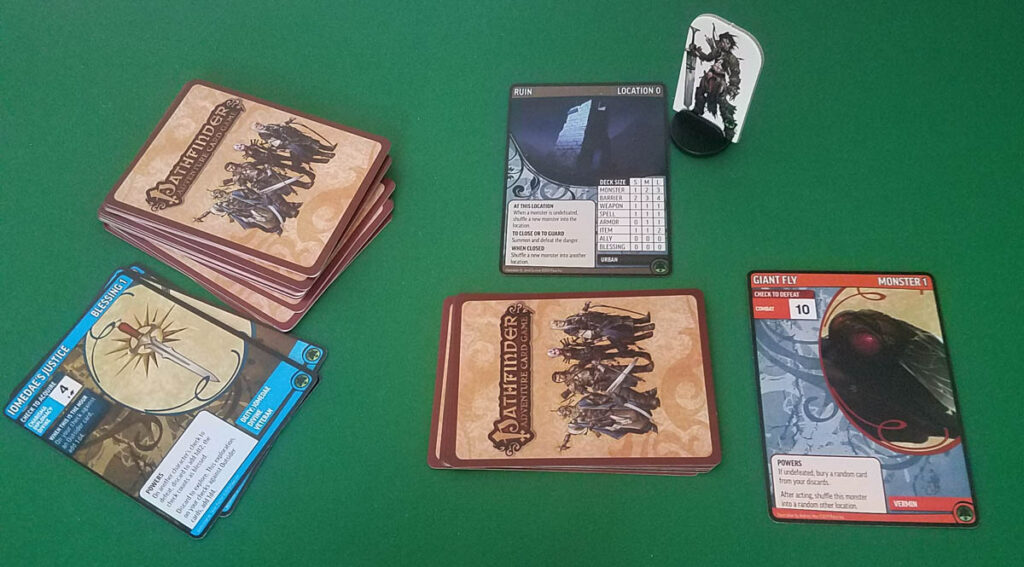 You will probably look at all of the cards and all of the information on those cards and think that Pathfinder Adventure Card Game is a very complex game. Well, it really isn’t. It’s really just a game of flipping cards, reading those cards, and rolling dice to try to gain/defeat them.

Throughout the game, you will be making skill checks. Again, it sounds confusing if you’ve never played a D&D-style RPG, but it’s really not. All that means is that you are rolling dice and seeing if you failed or succeeded. You make skill checks throughout the game both for fighting and acquiring new cards.

Each player will have his or her own character. They will have their own sets of attributes and special abilities, and they will have a unique starting deck of cards based the types and number of cards they are allowed to have at the beginning of the game. When you’re playing the game, you will roll certain dice (d4, d6, d10, etc.) based on your abilities and the cards that you have in your hand. For example, you could use a weapon to make your attack better by rolling an extra die during combat.

So, how does the game work? Well, you will have a specific number of locations depending on the scenario that you’re playing and the number of players. You’ll search through those locations for enemies, weapons, allies, and other goodies. You’ll roll dice to try to defeat enemies or gain other cards. You can help other players by sharing cards (when you’re in the same location) and you can sometimes even help them during skill checks.

When the enemies do damage to you, you have to discard cards from your hand. That’s a bad thing because if you ever run out of cards in your deck, you die. 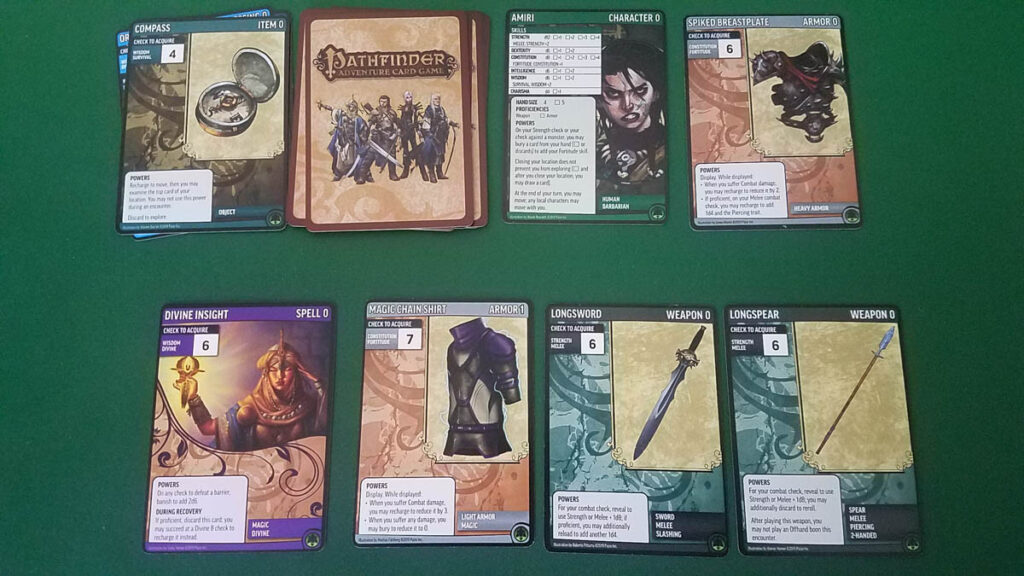 Pathfinder Adventure Card Game is one of the better cooperative role playing games that my group has played. This game was made for board gamers who love to play solo or have a gaming group that is willing to stick with their characters for many hours of role playing fun. I’ve enjoyed this one a lot and am looking forward to developing my main character even more and seeing how these stories play out.

Update: In 2019, an improved core set (rules tweaks, new graphic design, etc.) was released for Pathfinder Adventure Card Game. I’ve updated all of the links to point to that new version and added pictures of some of the new components.

Thanks for taking the time to read our Pathfinder Adventure Card Game review! To stay updated on all things cooperative board games, follow us on Twitter, Facebook, or via RSS.