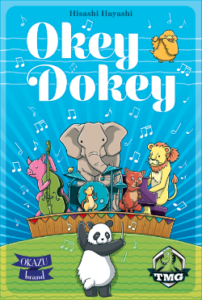 This Okey Dokey review was made after playing the game eight times.

What is Okey Dokey?

Okey Dokey is a cooperative limited communication card game in which you’re trying to put on successful music festival by placing cards in a 5 x 10 grid. It was designed by Hisashi Hayashi and the newest edition is published by Tasty Minstrel Games. 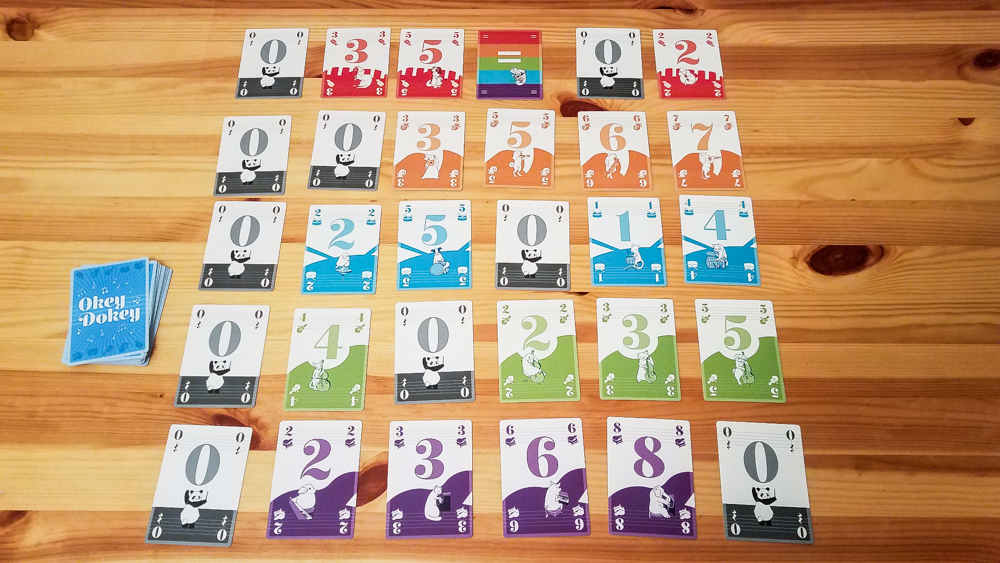 There are three types of cards in Okay Dokey: Musician cards, Equal cards, and Reset cards. The Musician and Equal cards are what you’ll be playing from your hand. The Reset cards will be used to create the five rows you’ll be using throughout the game, with two Reset cards placed beside each row.

There are five rows you’ll be playing cards to with each row representing a single suit. The rows of cards always have to be in ascending order unless you play one of the Reset cards, which are zeros and reset the order regardless of what the previous card was.

You always have to complete a full five-card column before you can move on to the next column. Each column has to have four Musician cards and one Reset card. You can also play Equal cards, which have values equal to the cards on their left. You can only play two Reset cards to each row, so part of the strategy is figuring out which Reset card to use for the column you’re working on.

This is a limited communication game, so there’s only so much you can say to your teammates. You can say how many cards you have of each suit. You can also say what suit you want to play or if you want to play a Reset card in a specific suit’s row. What you can’t do is tell your teammates the values of the cards in your hand or even hint that you have the next number in a specific suit.

If you’re able to make a 5 x 10 grid following the rules mentioned above, you win! If at any point a player can’t take an action on their turn, everyone loses.

I usually enjoy playing limited communication games, and simple filler games seem to hit the table more than any other type of game, so I’m not surprised that Okey Dokey has gone over well with my groups. It’s light, it’s quick, and it’s a challenging card game for 3+ players. If you enjoy games like Hanabi, The Game, and Cahoots, you will probably like Okey Dokey. If you don’t like those types of games, you should pass on this one.

Okey Dokey reminds me of The Game the most since both are games in which you’re trying to play numbers in order. I still prefer The Game because it’s a bit more challenging at all player counts, but I’d recommend Okey Dokey over The Game if you’re planning on playing with younger kids. I’ll be keeping both.

Thanks for taking the time to read our Okey Dokey review! To stay updated on all things cooperative board games, follow us on Twitter, Facebook, or via RSS.