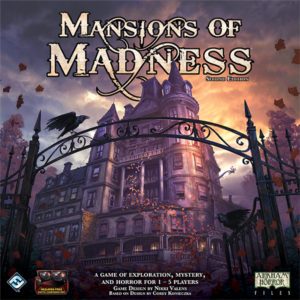 This Mansions of Madness: Second Edition review is a guest review by Ryan States of Laird Ryan States. Thanks Ryan!

We play Fantasy Flight’s Arkham Files line of games at our house with a regularity that normal people might find disturbing. So, I should preface this review by saying that as fan of this line—well, this is another—I’m predisposed to like it.

Mansions of Madness is a mystery and exploration game in which 1-5 players co-operate to complete and survive a paranormal investigation and/or save the world from the Horrors Without.

Mansions of Madness: First Edition was the most infamous victim of FF’s tendency to rush games and expansions to market with insufficient play testing. It was a great game hampered by technical issues. Setup was time consuming and easy to mess up in ways that rendered the game unplayable once discovered. It also set one player in the role of Keeper, while the other players played the investigators. The Keeper’s role was a thankless one, and not particularly engaging to play, as you managed setup and the monsters that tried to prevent the investigators from winning, but your strategy was pretty much automated.

The game required an errata to play out of the box, and one subsequent expansion was so ill tested, with components misprinted, as to render 3 of the 5 included scenarios moot. This resulted in a massive mail out by Fantasy Flight to rectify, and the game soon shifted to small scenario expansion packs which were better tested, but still left the issue of complicated setup and dull play for the Keeper intact.

We loved what MoM could have been, but we wound up not playing it very often as a result of these drawbacks. It was, for me, the classic example of a game that could have been great, but missed.

Lessons have been learned.

Mansions of Madness: Second Edition has addressed every flaw of the original and the result is one of my favourite board gaming experiences of all time.

The role of the keeper is now managed by an easy-to-use app that can be run on iOS, Android, PC and Mac. It manages the scenarios, and handles the monsters so that all players can now work together. It also drastically reduces setup time. In the first edition, the entire house was laid out in advance, and cards placed face down in them to indicate challenges and items to be found.  In this new edition, you need only lay out a couple of tiles, and tokens to indicate items of interest. As new rooms are discovered, you lay out additional tiles and tokens as instructed.

This adds a feeling of genuine exploration in addition to reducing setup time. Further, it expands re-playability. In some settings the layout of the house and items therein are partially randomized and can be replayed multiple times to different results.

Gameplay is simple to describe and teach, but challenging to master. There is a player phase, during which all investigators may move, explore, and use items and their own individual special actions. Once all players complete their turns, there is a Mythos phase. Monsters appear and attack, plot points are revealed, and the danger is ramped up.

It is a race to see if the players can discover the evidence needed to solve the mystery/stop the ritual/close the gate/what have you before they are killed, driven mad, or the clock simply runs out.

Check out Mansions of Madness: Second Edition on Amazon

We’ve played 3 of the scenarios so far, and they were all well-constructed and fair. Threat is scaled extremely well to the number of players (a mechanic that worked very well in first edition that I’m glad remained in place), and the game is as rewarding to play with two explorers as with five.

I’ve been impressed with how the scenarios feel legitimately narrative. This is as close as you can get to an RPG in a box. The scenarios feel like genuinely well-crafted adventures, and value is added by playing your characters in-character if you enjoy that.

The scenarios also indicate length of game from one hour to three or more, and are rated, I think accurately, for difficulty, so you have choices with new players, or the time available to play.

The Mansions of Madness app also allows you to stop a game midway through, noting only the location of your characters, and pick up at a later time. This is excellent as well.

I should say the app is a power eater, so be sure to have your charger nearby.

I am a fan of Betrayal at the House on the Hill, and if you dig that game, and others of its type, or, if you like the other Arkham Files games from Fantasy Flight, you will enjoy this game. It’s quick to set up, easy to teach, and fun for people who are not Lovecraft fans.

Having raved thus far, I should say there are things I don’t love.

First of all, certain items and rooms require puzzle solving to open. Some of these puzzles are easy, some are hard, and some just depend on how you’re wired. In Mansions of Madness First Ed., these puzzles were an extreme drag to set up using cardboard tiles, and we came up with house rules to trade time instead of bothering to solve them. The app takes the setup factor out, which is a major improvement, but there is now no way to skip them.

“Well,” you might say, “that’s the game,” and shrug. And sure, I get that. But there’s a flaw in the game mechanics, too. You get a certain number of attempts to solve the puzzle based on your investigator’s skills (usually their observation). I suck at puzzles. I could have the highest observation character in the pack, and it would take me a number of turns to solve it, whereas my housemate, who is excellent with them, can solve them in fewer moves. To me, that kicks a little at the immersive nature of the experience, and it annoys me. Your mileage will vary.

The largest drawback in my opinion, though, is re-playability.

The basic game allows you to play six scenarios. There is a DLC scenario you can buy. Buying the Beyond the Threshold expansion unlocks an eighth. There is a ninth scenario that unlocks if you either owned the first edition or have purchased the tile and miniatures expansions.

That means that right now there are nine extremely well-crafted scenarios, some of which are repayable and some of which are not. The scenarios are difficult enough that it may take some time to beat them, so you will replay them until you win.

The game is addictive enough, though, that I don’t see nine being enough for long. I hope they offer more DLC adventures soon, and regularly.

Cost is the other main issue. The app was not free to develop or to maintain, and we are paying for that, but it feels like the game, and most especially the expansions, are priced steeply for what you get.

It’s important to note, though, that if you own Mansions of Madness: First Edition, you don’t need to purchase the Recurring Nightmares figure and tile collection, as it includes the figures and tiles from the First Edition base game.  Suppressed Memories includes the tiles and figures from the two First Edition expansions, Forbidden Alchemy and Call of the Wild. There is a conversion kit with the base Second Edition set that lets you use your existing figures in place of these expansions. I was very pleased that my investment in the first edition was rewarded in this way.

Beyond the Threshold does introduce new mechanics and creatures, and it was not as expensive as the other expansions. It also has added to my enjoyment of the game, but it felt steep for what amounted to 4 figures, one scenario, and two monster figs. Again, YMMV.

Mansions of Madness: Second Edition, flaws and all, is still my favourite game to play from last year. It might be number one on my list of best designed games of all time. 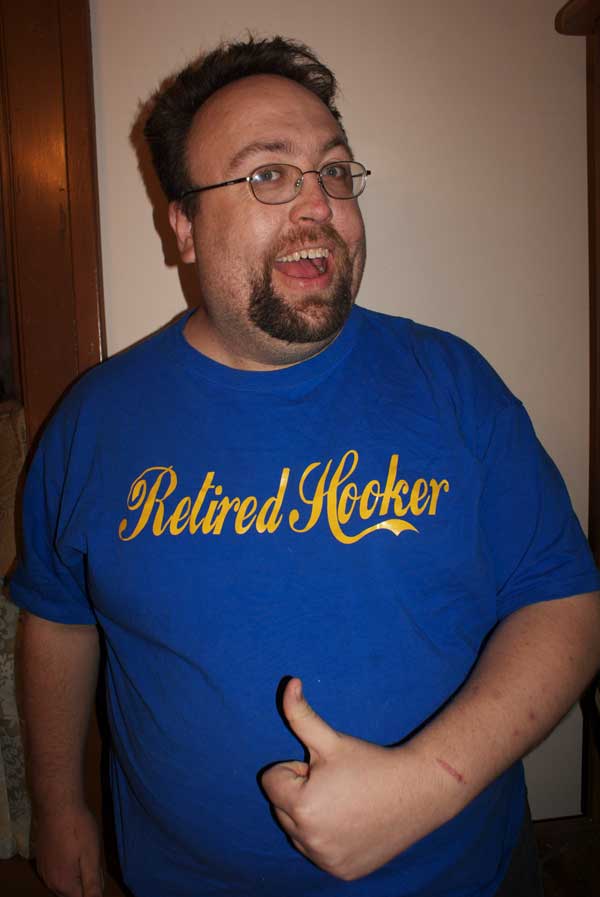 Laird Ryan States is a pen name used for the sole purpose of being better Googled.  Google, apparently, is my master now.  I have forsaken my name for Google.

Born with the much less Googleable name of Ryan States, I bought a Scottish Landholder title.  (It’s for a great cause, and I feel no shame, nor am I under any illusions the title is valid, but it brings me small joy)  So, here I am, with a domain name of my own, and a name that can be easily searched.

I was born in 1971 in Calgary, Alberta, and have been writing since childhood.

I recently decided to try self-publishing as part of a collective called The Asp.  I’m not averse to the traditional publishing methods, but they surely do seem unrewarding at present.

I released my first book, Silver Bullets on January 15, 2015, and hope to publish one every six months or so for a few years.  I have a lot of completed manuscripts in progress, and I’m working hard to get them in shape for an audience.

I live in Edmonton Canada with my fellow writer, and life-long friend, Gayleen Froese.  We have three adorable dogs, three lizards, and assorted small mammals.  I’m active on Facebook, too active, frankly for my productivity. Feel free to add me.  I’m also active on Google Plus but I don’t check it as often.  It’s less pushy.

Thanks for taking the time to read this Mansions of Madness: Second Edition review! To stay updated on all things cooperative board games, follow us on Twitter, Facebook, or via RSS.