Skip to content
Co-op Board GamesReviewsEscape: The Curse of the Temple Review 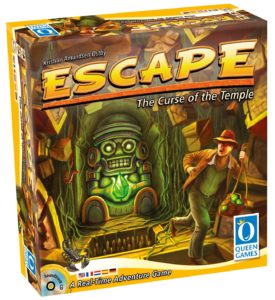 This Escape: The Curse of the Temple review was made after playing the game eight times.

What is Escape: the Curse of the Temple?

Escape: the Curse of the Temple is a real-time adventure game that was designed by Kristian Amundsen Østby and published by Queen Games. As explorers in a cursed temple, you have 10 minutes to explore the temple, find gems, discover the exit, and get everyone out alive. If even one person is left behind, everyone has lost the game.

Escape: the Curse of the Temple Gameplay 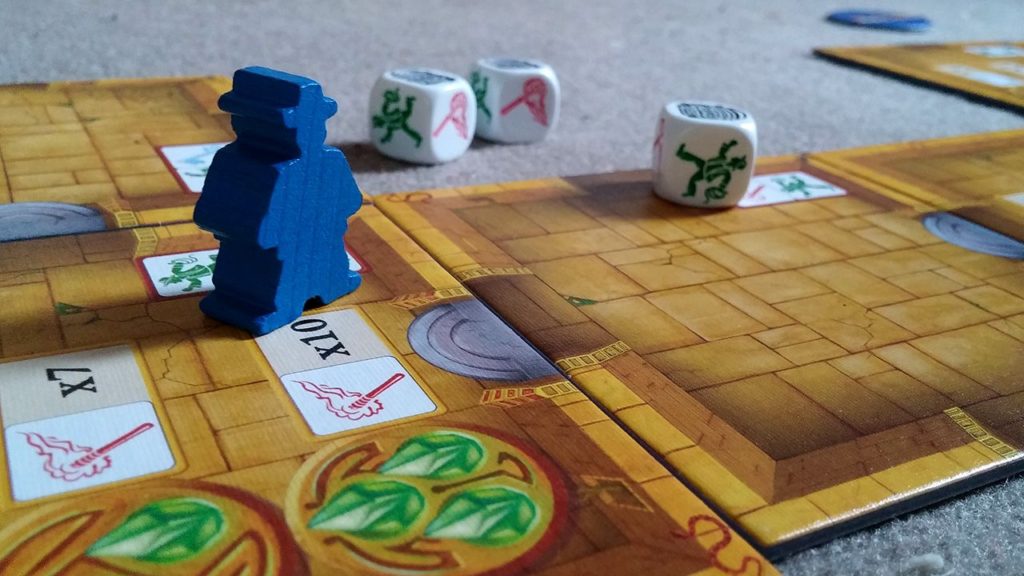 In Escape: the Curse of the Temple, every player gets 5 dice of the color of their explorer. You must roll the dice to enter rooms, collect gems and help out your fellow explorers.

All explorers start on the beginning tile, with only two others visible. As you roll and move through rooms – matching dice to the symbols in those rooms – new tiles are placed and the board builds itself as you go.

When you enter a room that has gems, you must roll a certain combination of symbols to collect them. When you finally find the exit, you and all your fellow explorers together must roll however many gems have NOT been collected.

The real trick to Escape: The Curse of the Temple comes in its time constraints. Where most games are played in turns, Escape is played all at once, everyone moving independently, at the same time.

A creepy soundtrack will be playing throughout the game. A gong sounds a third of the way through, telling you to either make it back to the first room or lose one of your dice for the rest of the game. This gong happens two more times until there is a final count down for all of the explorers to get out of the temple before it collapses.

If anyone is unable to escape within 10 minutes, all players lose the game.

Escape: The Curse of the Temple is a fantastic family game that will get people of all ages interested and involved in the action. Anyone who is looking for a quick little adventure game with tons of tension will want to check this one out.

Even though there are other cooperative board games that my group likes a bit more than Escape, it will definitely be staying in our collection since it works great as a filler game and it is one of the better cooperative family games out there. It also works quite well as a two-player game.

If you do end up being a fan of the game, you should definitely check out Escape: Zombie City or these Escape: The Curse of the Temple expansions: