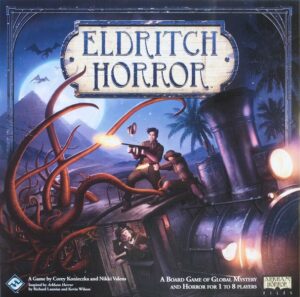 This Eldritch Horror review was made after playing the game four times.

What is Eldritch Horror?

Eldritch Horror is an adventure game in which you and your teammates travel the world and attempt to deal with approaching monsters, brutal encounters and terrifying mysteries.  You have to work together with your group to solve those mysteries and prevent the awakening of the Ancient Ones.

If you’ve read our Arkham Horror review, then you will have a pretty good idea of how to play this game. The one big difference between Arkham Horror and Eldritch Horror is that you are traveling all over the world in this one rather than just in Arkham City. Below is an overview of how each game of Eldritch Horror plays out. 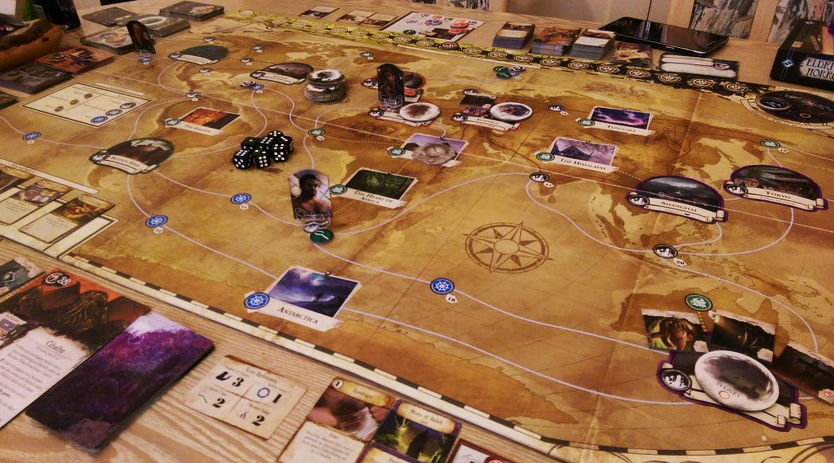 At the start of the game, a randomly selected player is chosen as the Lead Investigator. All players then receive any items specific to their characters listed on the back of their character cards.

There are three phases to each round of Eldritch Horror: the Action phase, the Encounter phase, and the Mythos phase.

Next comes the Encounter Phase. Each investigator will draw an Encounter card and may meet a new character around the world, or fight a monster.

Finally there’s the Mythos phase, in which a Mythos card is drawn and lists the events that will occur. This includes the spawning of new gates to the Other World, the appearance of new monsters, producing new clues, and spawning new rumors. These clues, rumors and encounters are used to solve the mysteries that come up and develop all over the board.

To beat Eldritch Horror, the investigators must solve all of the Ancient One’s mysteries. The three most common ways to lose the game are:

Check out Eldritch Horror at Amazon

Eldritch Horror is considered one of the best cooperative horror games because it is heavily thematic and tough to beat. Most Lovecraft and/or horror fans will love this one, but gamers who want a bit more character depth may want to look elsewhere.

Most of the people in my gaming group think that Eldritch Horror is an improvement over Arkham Horror. We do bring it to the table every once in a while, but most of us prefer Elder Sign (especially with the expansions) since it is quite a bit shorter and has the same theme.

As is the case with most Fantasy Flight games, you can get a bunch of Eldritch Horror expansions if you end up enjoying the base game.

Thanks for taking the time to read our Eldritch Horror review! To stay updated on all things cooperative board games, follow us on Twitter, Facebook, or via RSS.