Skip to content
Co-op Board GamesReviewsArkham Horror Board Game Review 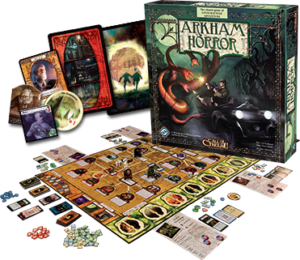 This Arkham Horror review was made after playing the game five times.

What is Arkham Horror?

In Arkham Horror, you and your friends are investigators who will be exploring and defending the town against unspeakable creatures as portals to another dimension begin to open up all over town. You must work together to close the portals to keep the Ancient Ones from making it through.

Arkham Horror was created by Richard Launius and Kevin Wilson and was published by Fantasy Flight Games.

Like most cooperative adventure games, Arkham Horror begins with players selecting a character, which gives everyone unique abilities, strengths, and handicaps. Throughout the game, the abilities can be changed and temporarily upgraded through the use of spells, skill cards and other items.

Players also randomly draw an Ancient Ones card to determine which one will be threatening the town for this particular game. 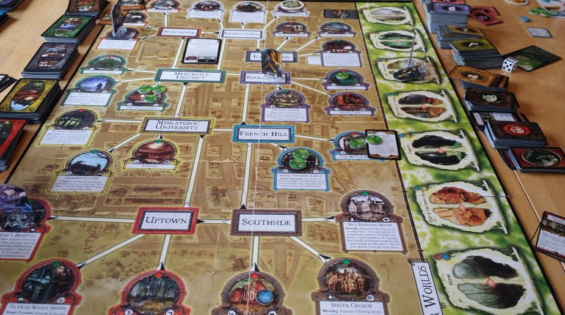 Rather than going through all of the Arkham Horror rules, here is an overview of the five phases of each round:

Just about everything in Arkham Horror is resolved by rolling dice. The cards and each character’s abilities have a direct impact on how many dice are rolled to fight or to resolve cards.

As the game continues, Doom Tokens are placed down, counting down to the inevitable return of the Ancient One. If you close the portals and prevent him from returning, you and the rest of the investigators have won. If all of the doom tokens are placed down before you close the portals, then he returns, and your only chance of winning is to defeat him.

Arkham Horror usually tells a good story, but this is the type of game that my group will only play once in a blue moon. If you enjoy long, story-driven games, you’ll probably be a pretty big fan of this one. There’s a reason why it is still a very popular cooperative board game more than a decade after it was first released. I’m personally not a big fan of this theme, but I can see why Arkham Horror is considered a classic.

For my board game group, we’d rather get our Lovecraft/Cthulhu fix through Eldritch Horror or Elder Sign. Both games are shorter (especially Elder Sign) and are basically streamlined versions of Arkham Horror.

There are plenty of Arkham Horror expansions, so there is a lot to add to the game if you end up enjoying it.

UPDATE: All links have been updated to point to Arkham Horror (Third Edition), which I’ve heard is a much improved version of this game.

Thanks for taking the time to read our Arkham Horror board game review! To stay updated on all things cooperative board games, follow us on Twitter, Facebook, or via RSS.