Skip to content
Co-op Board GamesReviewsT.I.M.E Stories Board Game Review 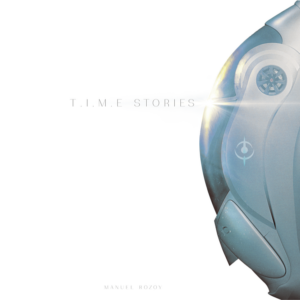 This T.I.M.E Stories board game review was made after playing through the first mission.

T.I.M.E Stories is a time-traveling “decksploration” game created by Peggy Chassenet and Manuel Rozoy and published by Space Cowboys. Agents from the T.I.M.E Agency are sent on missions to different places in time and are given the chance to take on the roles of different characters from those eras. Complete the mission in time or you will be recalled to the agency, where you will have to start your mission over again.

T.I.M.E Stories expansions give players the chance to go on unique missions. You get one mission, Asylum, in the base game box. 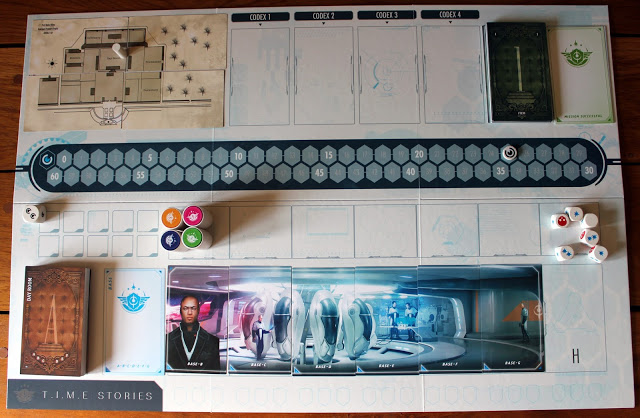 Each deck of cards in T.I.M.E Stories determines where your mission takes place. The initial 120-card deck included with the game is Asylum, set in a 1920s French insane asylum. Players start at their home base in the Agency where they are briefed on their mission.

The players explore different locations through the deck of cards, which details their environment, characters they run into, and developments in the story through panoramic pictures. Some cards are unlocked only when a player has a specific item, and a set of action dice is used to determine the outcome of altercations, or tests.

Each T.I.M.E Stories mission has a specified number of time units that the players must use to move around the environment. Once these units are used up, the agents are recalled to base, whether they have completed their mission or not.

The game looks more complicated than it actually is. Essentially you are moving your T.I.M.E Stories characters to different areas, looking at cards, and reacting to those cards. It is very story-driven, so if you are able to get into mission’s story and role-play your characters, this game will probably be a hit with your group.

T.I.M.E Stories is a very well-designed and conceptualized game that would be a great pick for anyone looking for a thematic, story-driven cooperative game. It is a game for pretty much all crowds and I can see why so many people look forward to seeing the new stories and artwork that come with each new expansion.

This is a fantastic game system that can work with just about any type of story, so I’m looking forward to checking out all of the missions that Space Cowboys is working on.

Thanks for taking the time to read our T.I.M.E Stories board game review! To stay updated on all things cooperative board games, follow us on Twitter, Facebook, or via RSS.