This The Dresden Files Cooperative Card Game review was made after playing the game about 15 times.

What is The Dresden Files Cooperative Card Game?

The Dresden Files Cooperative Card Game is a fantasy/mystery hand management game in which you use your cards to investigate cases and fight enemies. There are five “Book” scenarios that you can play through and each one is based on one of the first five The Dresden Files novels.

The Dresden Files Cooperative Card Game was designed by Eric B. Vogel and is published by Evil Hat Productions. 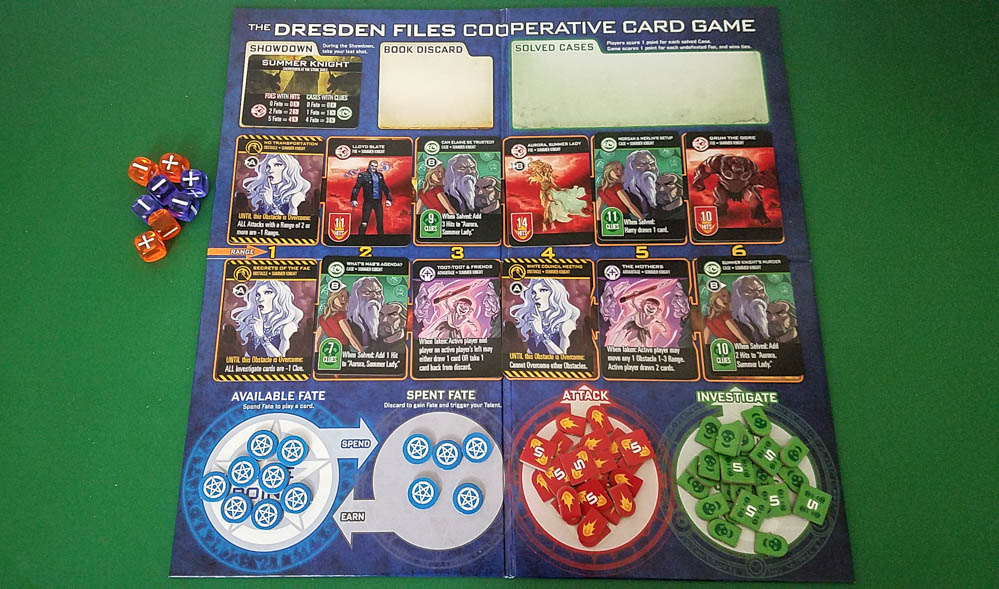 In The Dresden Files Cooperative Card Game, your goal is to use your cards to gather clues for the cases you’re investigating, fight some of the foes who are standing in your way, and ultimately end up with more solved cases than remaining foes on the board.

Each game you’ll choose one of the five Books to play through, or you can create a random Side Job scenario. The Book’s 12 cards are shuffled and put in two rows on the board, the two cards furthest to the right being the furthest away from your characters at range 6.

The Book decks contain Case, Foe, Obstacle, and Advantage cards. Your main focus is dealing with the cases and foes, but you usually have to take out the obstacles first since they limit what you can do on your turn. The Advantage cards give you different types of benefits when they’re removed.

Fate is the currency in the game. Each card costs a certain number of Fate points to play and some cards require you to roll Fate dice, which can add to or subtract from the Fate values. 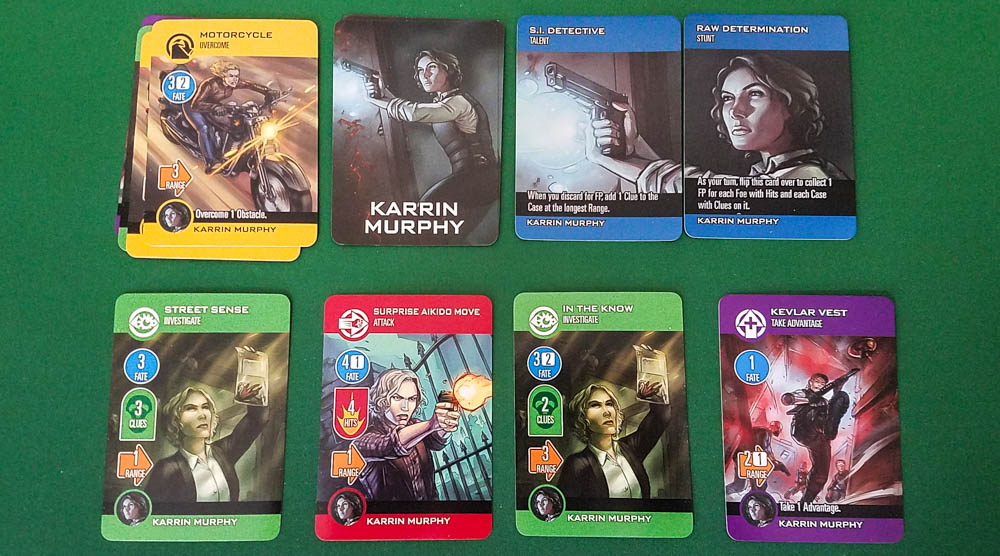 You have four options on your turn: play one card, discard a card for its Fate value, use your character’s Stunt ability, or pass by spending one Fate point. When you play a card, you pay its Fate cost and you check its range to see how far down the two rows the ability can reach. When you discard a card, you not only gain its Fate points, you also get to use your character’s unique Talent ability. Your character’s Stunt is his or her best ability, but it can only be used once per game. You don’t get to draw cards at the end of your turn, but there are some cards and abilities that allow players to draw new cards.

This isn’t a full-on limited communication game, but you aren’t allowed to tell other players exactly what you have in your hand. You can talk about the strengths and weaknesses of your hand in general terms, but you can’t state specific numbers, like Fate costs or investigate/attack values.

Each game ends with a Showdown phase, which is your last chance to solve cases and take down foes. The Showdown is triggered if a player can’t afford the Fate cost of a card (due to a bad Fate roll), if a player has to pass and there are no Fate points left, or if you decide as a group to trigger it. For each remaining case and foe with a hit/clue token on it, you roll dice and see how many successes you can get.

You’ll win if there are more solved case than foes remaining on the board at the end of the Showdown. 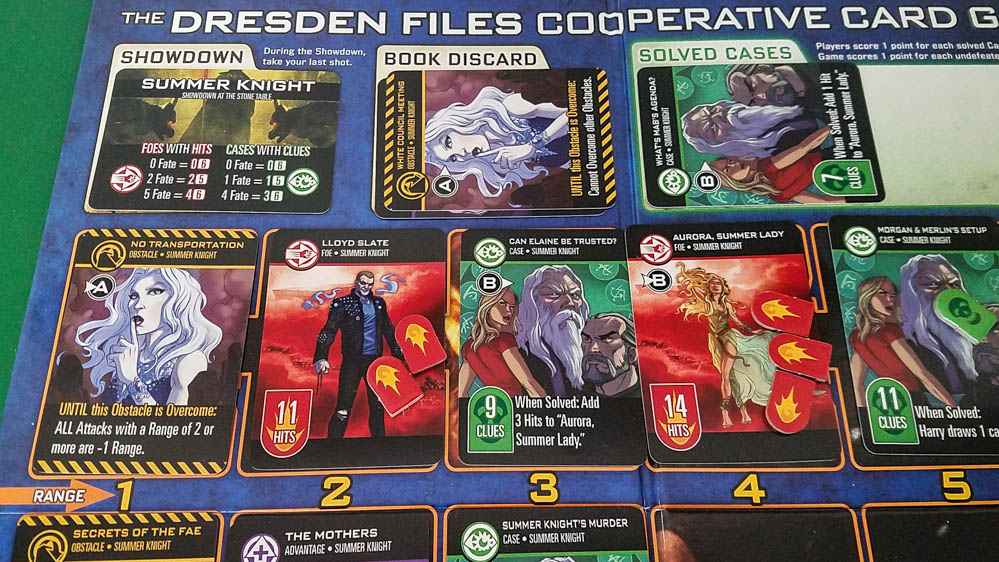 I like The Dresden Files Cooperative Card Game a lot, and this is coming from someone who has never read any of the novels. I can almost guarantee that fans of the novels will get more out of this game than I do, but I like it because I get a full (and fun) board gaming experience from a game that only takes about 30 minutes to play. The Fate system and the communication restrictions combine to create a unique co-op, which is why this game has been in my collection for over two years now.

I definitely recommend giving this game a shot if you’re a fan of The Dresden Files, but I also recommend it to anyone who enjoys playing co-op puzzle games. There really aren’t too many other cooperative filler games like this out there right now.

Thanks for taking the time to read our The Dresden Files Cooperative Card Game review! To stay updated on all things cooperative board games, follow us on Twitter, Facebook, or via RSS.