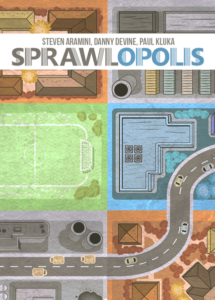 This Sprawlopolis review was made after playing the game about 25 times.

Sprawlopolis is a cooperative city building game in which you attempt to create a new city from scratch and meet specific scoring requirements. The game was designed by Steven Aramini, Danny Devine, and Paul Kluka, and it is published by Button Shy Games. 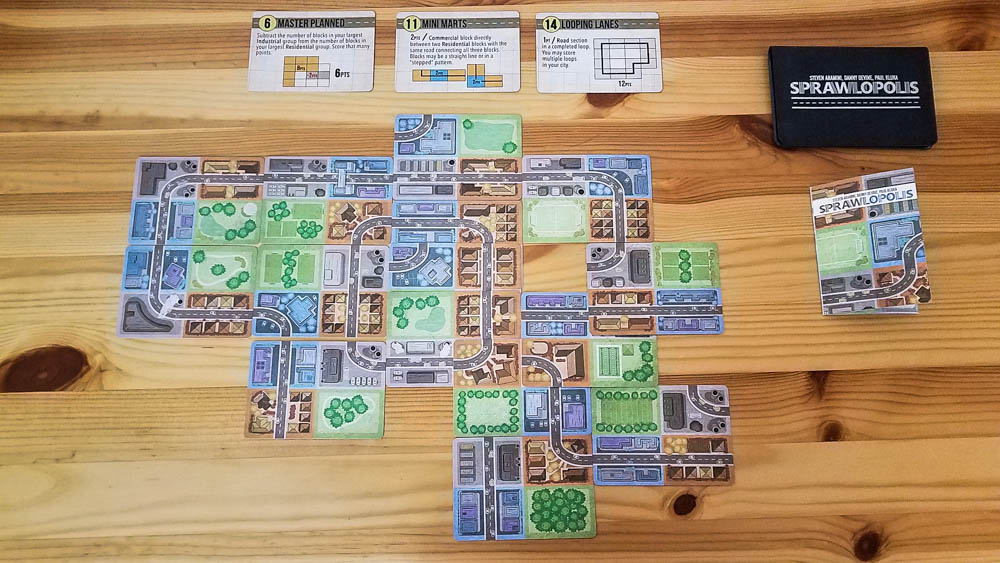 Each of the 18 cards in Sprawlopolis is double-sided, with one side having a unique scoring condition and the other having the four zone types – commercial (blue), industrial (grey), residential (orange), and parks (green) – and roads that will be in your city. At the beginning of the game you’ll draw three random cards to be the scoring conditions and your “target score” will be the sum of the numbers shown on those three cards. The top card of the deck is then placed in the middle of the table to start your city.

Throughout the game the active player will have three cards while everyone else has one. You can talk about the cards in your hand, but you can’t show them to anyone. On your turn, you simply play one of your three cards, pass the other two cards to the next player, and then draw a new card. Your played card has to either have at least one of its zone’s edges touching another zone’s edge or it has to have at least one of its zones covering another card’s zone.

The game ends once all 15 cards have been played. You’ll get points for the three scoring cards and for the largest connected group of each of the four zone types (in the picture above, I got six points for my largest residential group). You’ll get one negative point for each road in your city. You’ll win if you meet or exceed the target score.

Sprawlopolis is an excellent filler game. It’s a unique design that gives players some tough puzzles to solve, but it’s also very easy to teach and learn. I prefer it as a solo or two-player game because I have more of my own cards to play, but I’ve also enjoyed it at three and four players.

I really don’t see too many people disliking Sprawlopolis. I think everyone should at least try it, but it’s going to work best for fans of the city-building genre and anyone who likes having some light and quick games available for game nights.

Sprawlopolis is probably going to stay in my game bag for a long time. It’s not going to be played all the time, but I’m glad it’ll be there as an option.

Thanks for taking the time to read our Sprawlopolis review! To stay updated on all things cooperative board games, follow us on Twitter, Facebook, or via RSS.