Skip to content
Co-op Board GamesReviewsEscape the Dark Sector Review 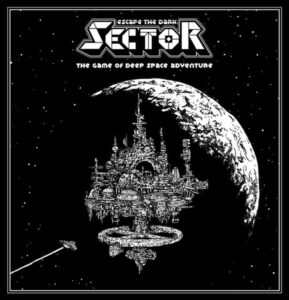 This Escape the Dark Sector review was made after playing the game six times. We were sent a copy of this game by the publisher in exchange for an honest review.

What is Escape the Dark Sector?

Escape the Dark Sector is a cooperative sci-fi adventure game in which you have to try to find a way to escape the detention block of a strange space station and get to your ship. To win, you have to get past enemies and traps and keep everyone alive.

During a game of Escape the Dark Sector, you’ll be attempting to make it through three acts (four chapter cards per act) and then defeat a final boss. You’ll do this by using your crewmembers’ skills, weapons, and any other items you find along the way.

Each crewmember has a unique mix of the game’s three traits (Might, Cunning, and Wisdom) on their die, giving them base strengths and weaknesses. The crewmembers also get Cybernetics cards that give them starting weapons or abilities. Your crewmember has four slots for other items that you might pick up during the game; items either take up one or two slots.

Each chapter card will have some story text and will tell you what you can do to advance. In many cases you’re going to go into combat with the enemies, but you might also be able to perform some type of skill check to quickly move on to the next chapter. Every time you’re about to reveal a new chapter card, you have to pick a crewmember to be the leader in case the card has a “You” effect, which would only affect that crewmember. 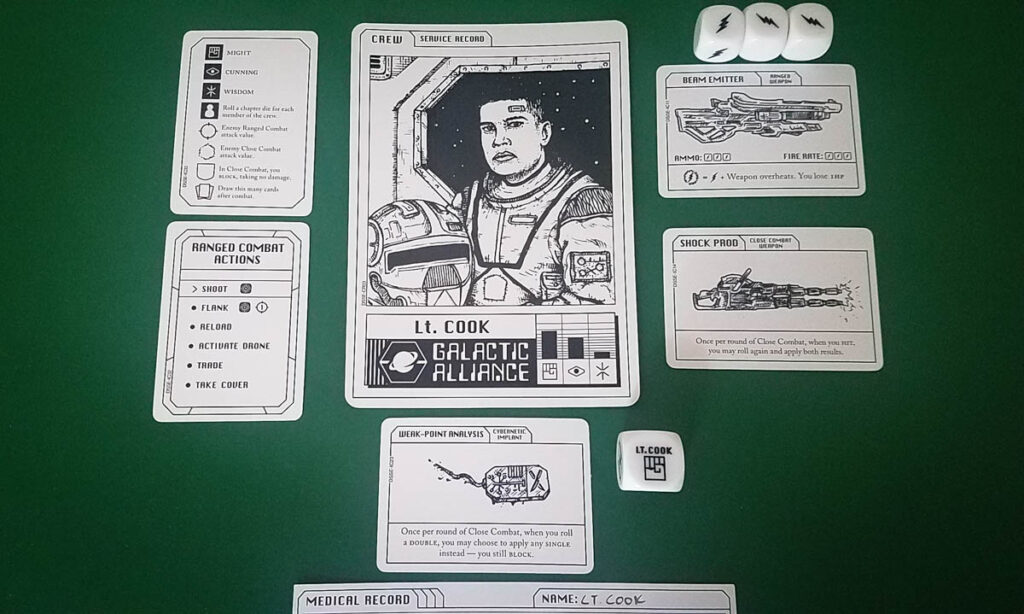 Combat is usually multiple rounds of you hitting the enemy and the enemy hitting you back. You have to remove all of the enemy’s health dice to move on to the next chapter card. During each combat round, your group can choose to go into ranged combat or close combat. Once you go into close combat, though, you can no longer go into ranged combat against that enemy. Instead of fighting during a combat round, you can choose to heal, reload a weapon, take an item from another crewmember, or do nothing (“take cover”).

In ranged combat, you use a weapon’s ammo dice to attack the enemy and remove one health die per success. You also have to roll the enemy’s hit die to see if you were hit. Instead of firing a weapon, you can take the Flank action, which allows you to attack at the start of the next combat round without any retaliation from the enemy.

In close combat, you simply roll your crewmember’s die and remove matching health dice if there are any. If you don’t roll a shield icon on your die, you lose one health.

When your group defeats an enemy, you’ll get to draw one or more item cards that anyone can take.

You’ll win by defeating the boss. You’ll lose if a crewmember dies. 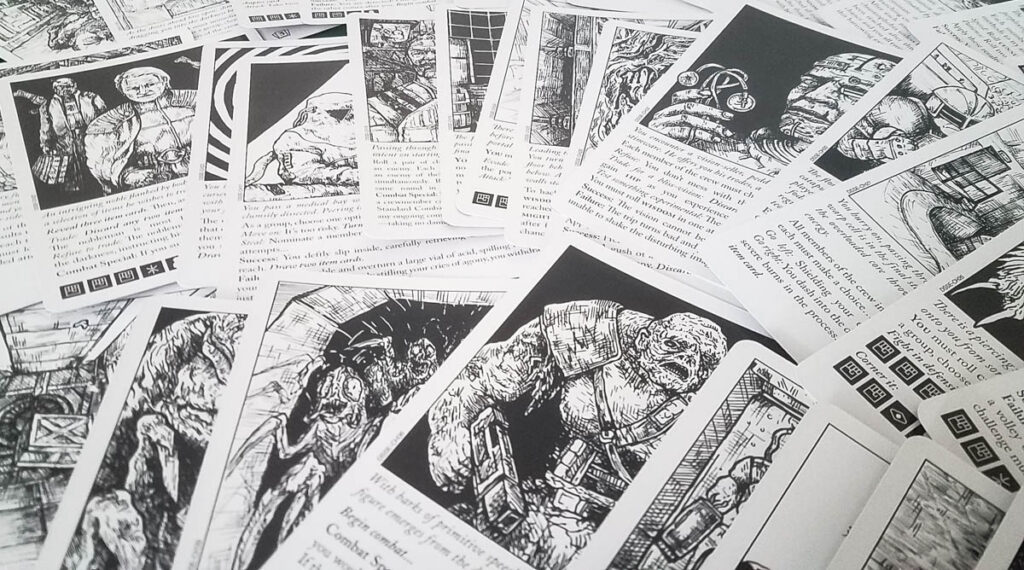 Escape the Dark Sector is another solid lightweight co-op adventure game from Themeborne. It’s a little disappointing to me that its gameplay feels so similar to Escape the Dark Castle, but I do like the new combat options. Plus, the writing and the art once again do the job of pulling you into the world. The only reason that I won’t be keeping Dark Sector is because I prefer Dark Castle’s theme.

If you’ve never played Dark Castle and you want to know which one to get, I’d say just choose the theme that you’re most interested in. If you’re equally interested in both, go with Dark Castle for the slightly lighter, better flowing experience, or go with Dark Sector if you want a few more strategic options. Oh, and if you’re a huge fan of Dark Castle and want more of that type of experience, you’ll definitely love this game.

Thanks for taking the time to read our Escape the Dark Sector review! To stay updated on all things cooperative board games, follow us on Twitter, Facebook, or via RSS.