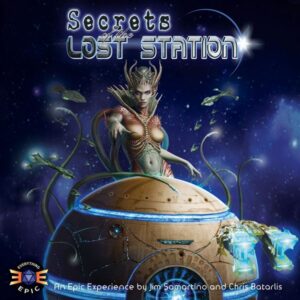 This Secrets of the Lost Station review was made after playing through the first campaign. We were sent a copy of this game by the publisher in exchange for an honest review.

What is Secrets of the Lost Station?

Secrets of the Lost Station is a sci-fi, adventure, campaign game in which you play as the last members of a 4000-year-old secret society who are tasked with defending the galaxy. During each mission you have to react to different events that take place on a mysterious space station, learn about your explorers, and fend off enemies.

Secrets of the Lost Station was designed by Christopher Batarlis and Jim Samartino, and it’s published by Everything Epic Games.

Secrets of the Lost Station Gameplay 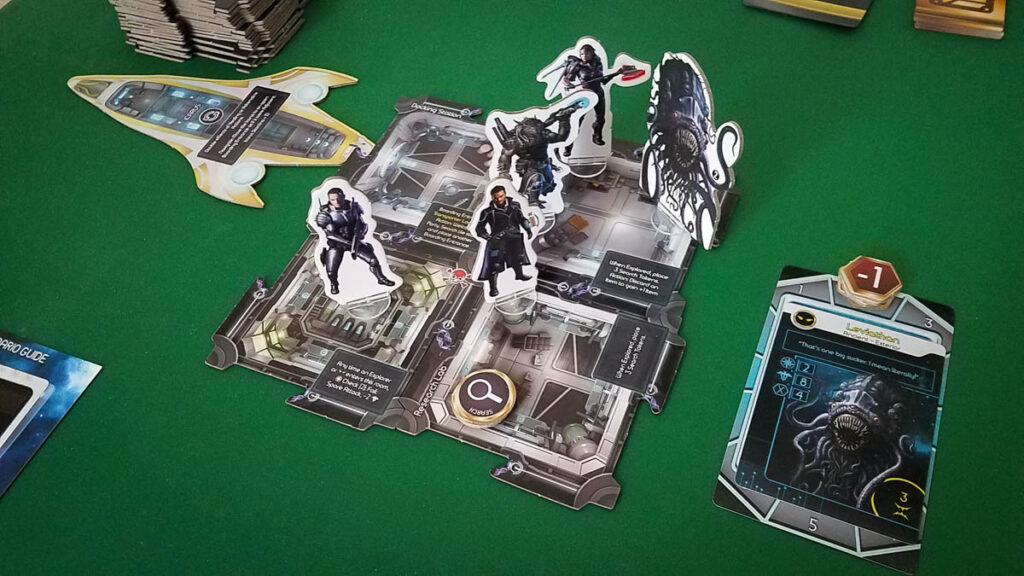 Secrets of the Lost Station has 10 campaigns that you can play through, each containing a number of different scenarios with unique objectives. To start or continue a campaign, you simply choose your explorers and then go to the next scenario in the Scenario Guide.

Setting up a scenario is pretty straightforward since the guide lists all of the components you’ll need. Besides the story text, the Station Event Track will be different from scenario to scenario, with tokens that activate as you move through the game.

The explorers have six attributes – Strength, Dexterity, Knowledge, Mythos, Combat, and Movement – which will let you know how many dice to roll when performing those types of skill checks. Explorers also have four main adjustable stats: Stamina (health), Audacity (gives you rerolls), Courage (allows you to use the “focused” version of your ability cards), and Power (allows you to upgrade your abilities). Each explorer also has a unique one-use-per-scenario ability. 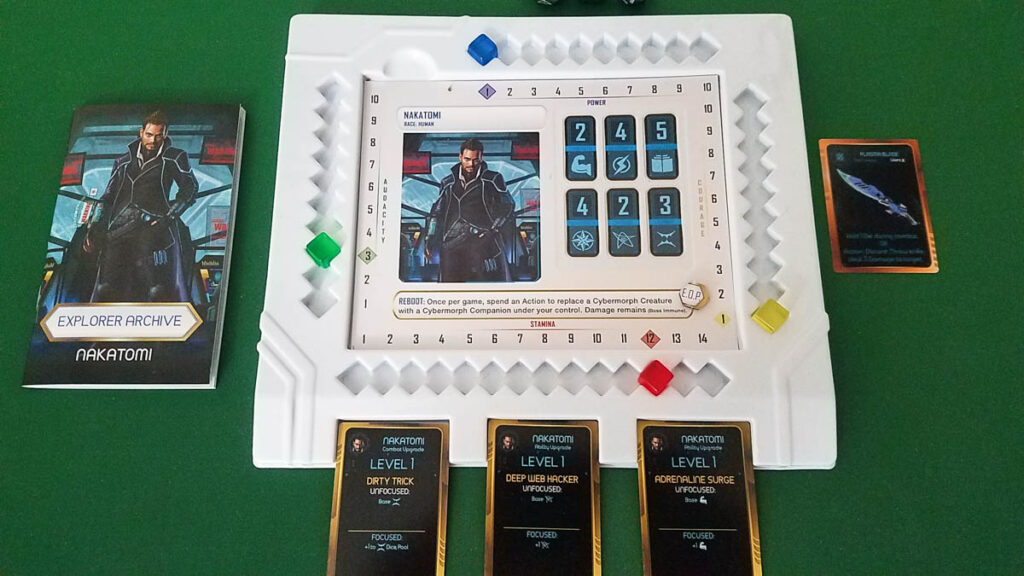 Player turns have a two-phase structure: 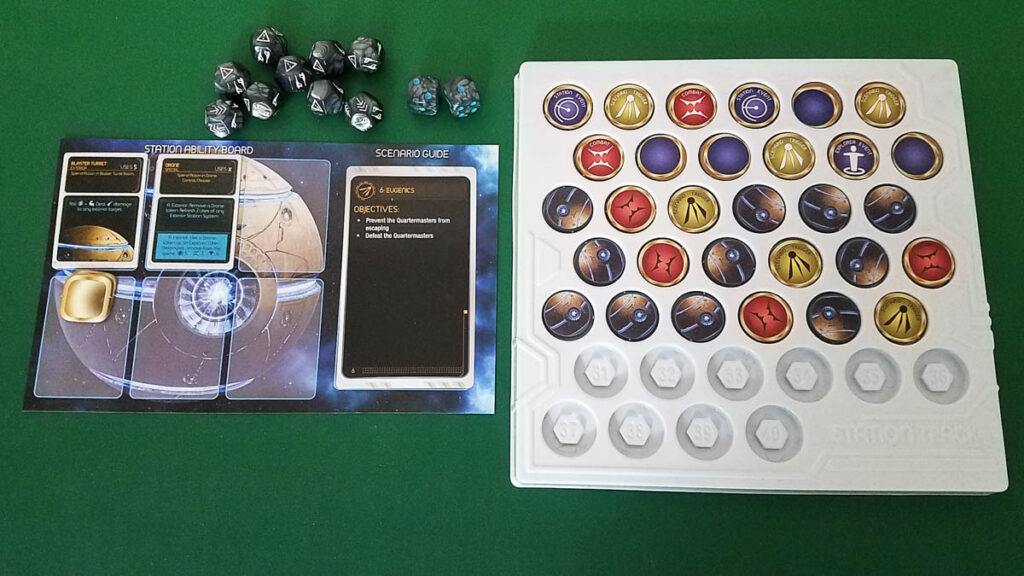 You’ll beat a scenario if you’re able to complete all of its objectives. You’ll lose if you don’t complete the objectives in time, if an enemy completes their objective, or if an explorer is “near death” (basically their health was reduced to zero twice and no one was able to revive them). If you do lose, you can choose to replay the scenario or move forward by using the Alternate Reality Control, which could have negative consequences later on.

As you move through a campaign, you’ll be able to unlock a whole bunch of stuff, including new characters, new upgrades for the explorers, new items, and new Station rooms.

That’s just a basic overview. Check out the Secrets of the Lost Station rulebook (PDF) for more info. 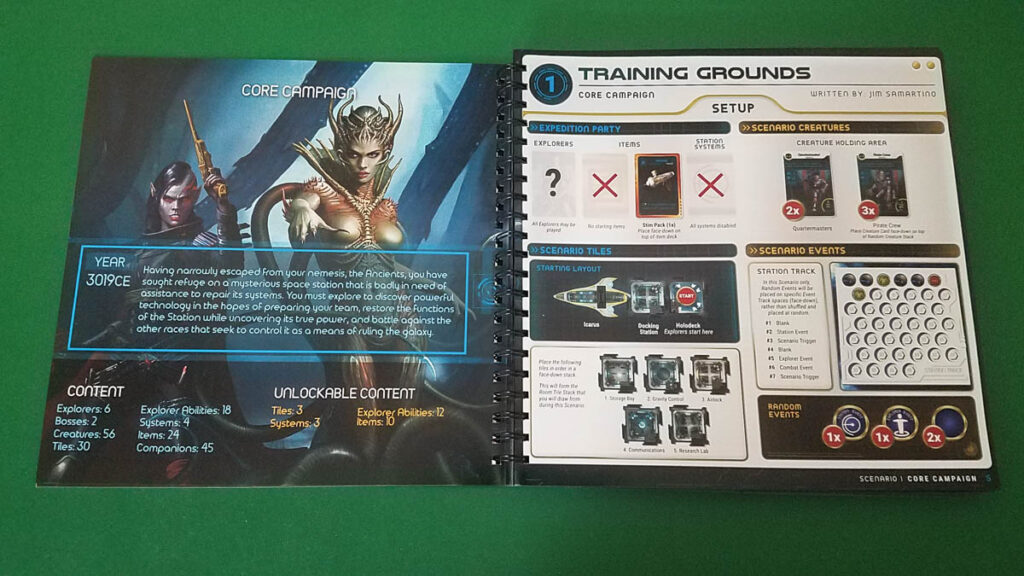 I was always excited to get to the next scenario during that first campaign, so yeah, I’m a big fan of Secrets of the Lost Station. Its gameplay is smooth, everyone gets to make a lot of important decisions throughout the campaign (both in the book and on the board), and the story that plays out is legitimately memorable. The game isn’t without its issues, but on the overall my group has had a fantastic time playing it.

I think most science fiction fans will love Secrets of the Lost Station. Also, if you’ve liked other storytelling board games in the past, chances are you’ll really enjoy this one. This is a big, expensive game, though, so if you don’t usually like the sci-fi genre, this probably isn’t for you.

Secrets of the Lost Station Links

Thanks for taking the time to read our Secrets of the Lost Station review! To stay updated on all things cooperative board games, follow us on Twitter, Facebook, or via RSS.