Skip to content
Co-op Board GamesReviewsJagged Alliance: The Board Game Review 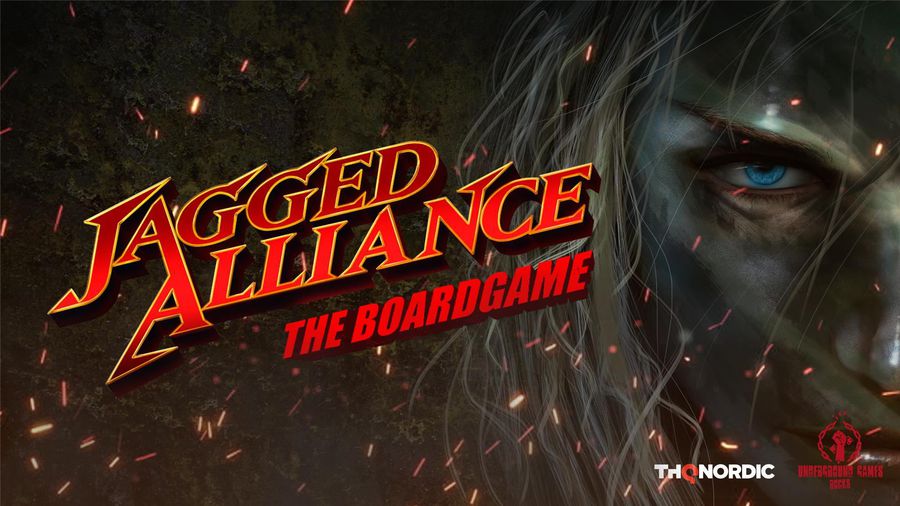 This Jagged Alliance: The Board Game review was made after playing through the campaign one time. We were sent a copy of this game by the publisher in exchange for an honest review.

What is Jagged Alliance?

Jagged Alliance: The Board Game is a cooperative tactical combat game based on the popular video game series. This is a campaign game in which you are mercenaries hired to free a nation from an evil dictator.

Jagged Alliance: The Board Game was designed by Marko Jelen and Jan Wagner, and it is published by Underground Games. 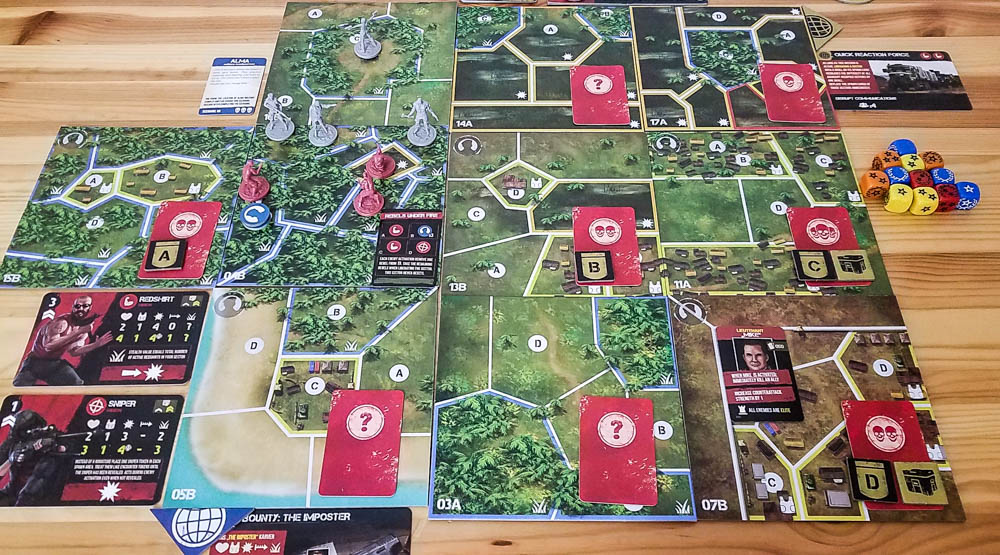 Your goal in Jagged Alliance is to complete a series of scenarios and eventually defeat the dictator. You’ll do that by fighting the dictator’s armies and making your mercenaries more powerful along the way.

Each scenario’s map is made up of sectors (the square tiles), and each sector is made up of areas with different terrain types. You’ll be moving from sector to sector attempting to liberate those sectors by defeating all of the enemies that show up.

After you’ve set up a scenario, there will be face-down Spawn cards in each sector. Spawn cards list the specific types of enemies that are located in the sector and possibly some hidden encounters that you’ll need to reveal and deal with. When you enter a sector, you’ll flip the Spawn card and place the enemies and encounter tokens in their designated areas.

There are two phases in each round of the game: the Player Phase and the Dictator Phase. During the Player Phase, you’ll move around the map and use your weapons and other gear to fight the enemies. There’s no set turn order in this game; you can switch it up every round. During the Dictator Phase, the threat level usually increases, an Event card is revealed, and the dictator could counterattack if the threat level reaches certain points on the Threat Track. 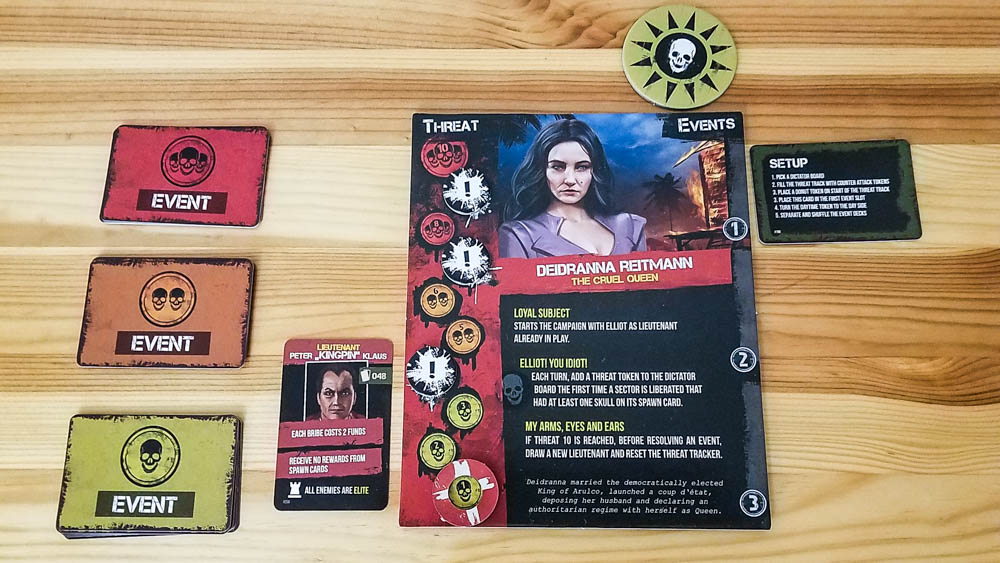 Each mercenary has a pool of stamina cubes that represents their action points as well as their health. Most of the actions you take cost stamina points, which push those cubes to the Fatigue section of the track. When you’re injured, the cubes are moved to the Wounds section. You get some cubes back from the Fatigue section at the beginning of each turn, but you need to be healed to get cubes back from the Wounds section of the track.

Your mercenary will get knocked down or possibly killed if you ever have to move a stamina cube to the Fatigue or Wounds section on your board and you don’t have a cube to move. This is why you usually want to have at least a couple of cubes available at the end of each turn. If your mercenary does get killed, you’ll get to activate a new one at the start of your next turn, but you’ll lose half of your stuff. If all of the mercenaries are knocked down or killed at the same time, you’ll lose.

Your weapons and other items list the number and color of dice you can use during your attacks and on defense. You simply choose the gear you want to use, pay the stamina cube cost if there is one, and then try to roll a certain number of successes. You’ll get Loot cards for defeating enemies and liberating sectors throughout the game. 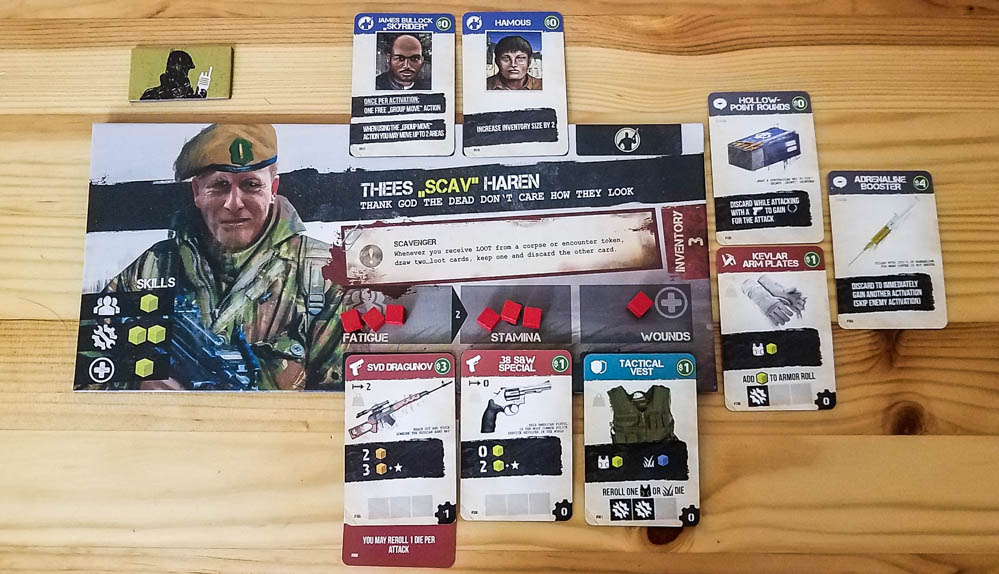 After you’ve completed your turn, all of the enemies in your sector activate, potentially shooting at you and/or your teammates. Enemies’ cards list their stats (movement speed, attack power, range, etc.) and what they do when they activate. After every mercenary has activated, you move on to the Dictator Phase.

Most of the scenarios also include missions, which are basically side quests that usually make the scenarios tougher until they’re cleared. You’ll also have to deal with the dictator’s lieutenants, who have ongoing abilities and abilities that make it tougher to liberate their sectors.

You’ll beat a scenario if you complete all of your objectives (usually by liberating specific sectors). You’ll lose if all of the mercenaries are knocked down at the same time, if you run out of mercenaries, or if you fail to defend against one of the dictator’s counterattacks. If you lose, you’ll have to play through the scenario again, but you do get to keep any of the Loot cards you’ve gained and you collect any rewards for the goals you’ve completed.

After you’ve completed a scenario, you’ll gain new cards from the A.I.M. (Association of International Mercenaries) deck and they’ll be added to the Market. These cards can be new weapons, allies, income from the locals, and other things. Between scenarios you can buy and/or sell cards, swap gear with other mercenaries, or even choose to swap in different mercenaries.

I definitely did not cover all of the rules here. For more info on the game, take a look at the Jagged Alliance rulebook on BGG. 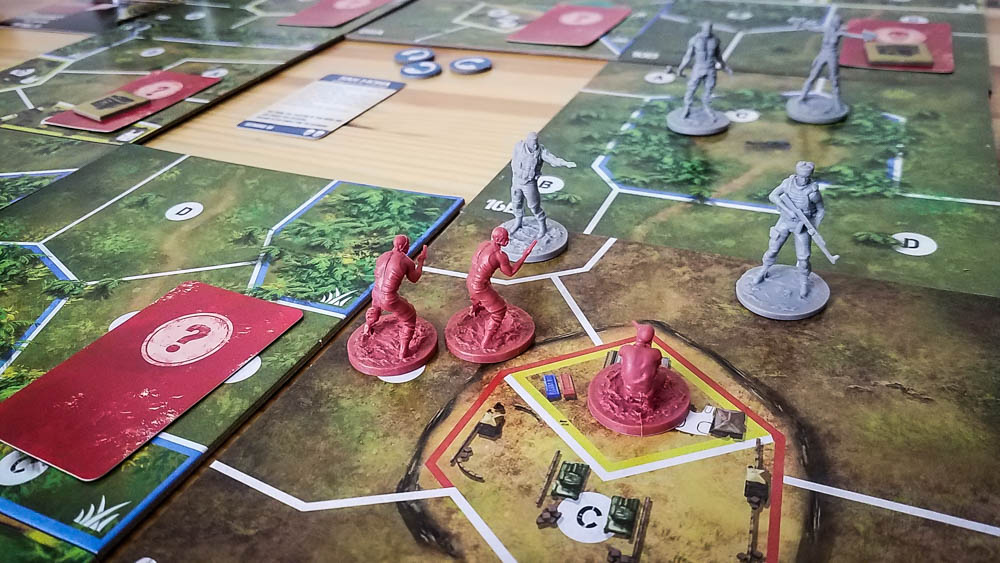 I think Jagged Alliance: The Board Game is a very solid co-op and definitely worth getting if you’re a fan of the video game series or you want to play a legit tactical combat board game. The stamina system is amazing, the game looks great on the table, and watching your mercenaries get stronger as they try to deal with an angrier and angrier dictator is very cool. The rulebook isn’t great, but once you learn how everything works the game plays smoothly and there are plenty of satisfying moments both during and between the scenarios.

I’m looking forward to playing through the campaign again with some different mercenaries and a different dictator. I usually switch groups when I play a campaign game the second time around, but all three of the people I played Jagged Alliance with are all in to play through it again… and that makes me like the game even more.

Thanks for taking the time to read our Jagged Alliance: The Board Game review! To stay updated on all things cooperative board games, follow us on Twitter, Facebook, or via RSS.