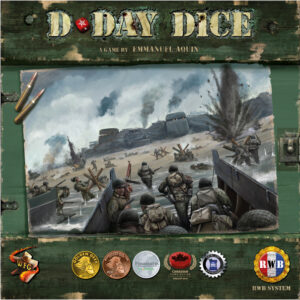 This D-Day Dice (2nd Edition) review was made after playing the game eight times. We were sent a copy of this game by the publisher in exchange for an honest review.

What is D-Day Dice?

D-Day Dice is a cooperative World War II dice game in which you get to play as Allied soldiers who are trying to advance up different beaches to take out key machine gun nests. The game was designed by Emmanuel Aquin and is published by Word Forge Games. 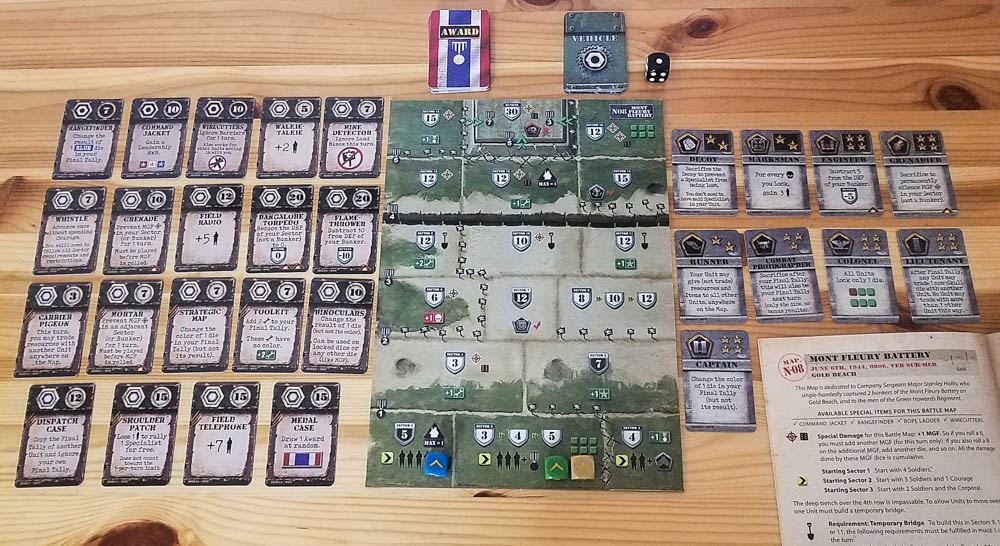 To play a game of D-Day Dice, you choose one of the scenarios, grab that scenario’s battle map, and put out the different sets of cards. Everyone chooses one of the countries to play as and grabs their unique player aids. Your goal is to use your limited resources (soldiers, items, vehicles, etc.) to fight your way through the map and make it to the bunker with at least one surviving soldier.

Each player has two red, two white, and two blue dice. During a turn, everyone will roll their six dice, lock two of them after that first roll, and then optionally reroll any of the other dice two more times.

Your die results can be: 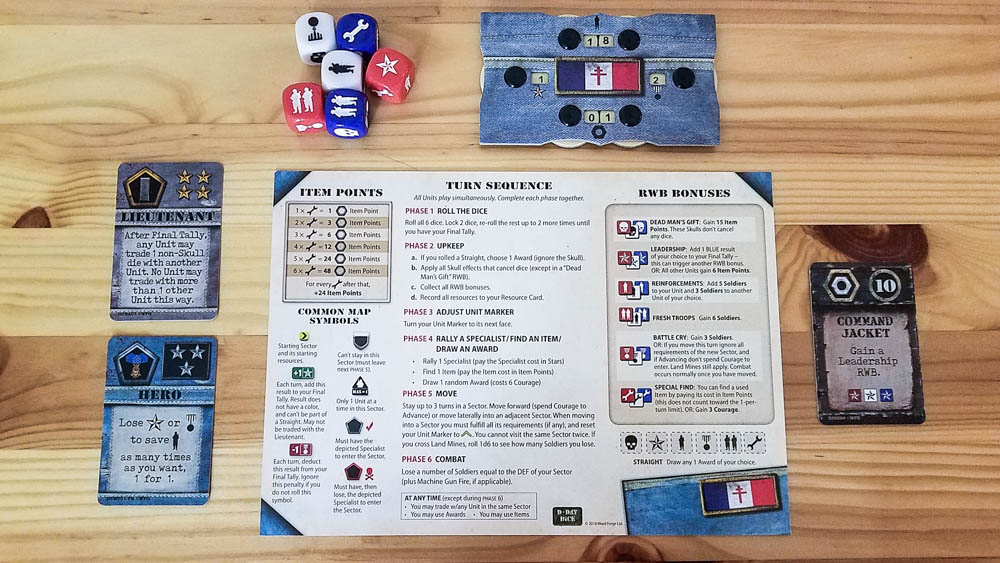 There are two types of special rolls that you can get: Red, White, & Blue (RWB) and Straights. If you roll a three-of-a-kind in all three colors, you not only get the results shown on the dice, you also get an RWB bonus, which activates one of the unique abilities shown on your country’s player aid. If you roll one of each symbol, you get a Straight, which lets you look through the Award deck and take one (these are basically more powerful items). If you get the RWB bonus for skulls or you use a skull in your straight, those skulls don’t cancel out any dice like they normally would.

After you record your results on your resource cards, everyone gets a chance to use some of their resources to buy new cards (specialists, items, etc.). After that, each unit can optionally move. You can stay in most sectors for three turns, but some you can only stay in for one.

At any point before combat (see below), you can trade resources with other units in your sector. The only things you can’t trade are specialists and awards.

Combat is the last part of a turn. Each sector has a defense value that represents the number of soldiers each unit is going to lose, so you have to have at least that number of soldiers (specialists count as soldiers, too) to survive. A lot of sectors also deal extra damage from machine gun fire, determined by rolling a d6.

You’ll beat a scenario if each unit in your group is able to make it to the bunker with at least one surviving solider. You’ll lose if anyone runs out of soldiers or if anyone’s unit is unable to move when they need to (lack of courage).

Check out the D-Day Dice (2nd Edition) rulebook (PDF) to learn more about how the game plays. 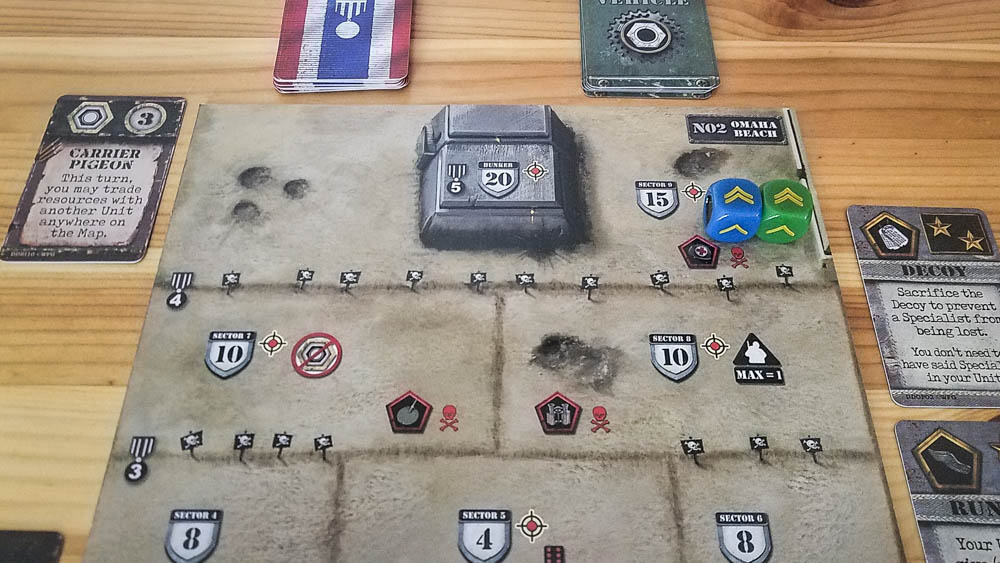 I think D-Day Dice is fantastic. The theme comes through well, the RWB system is awesome, and it’s simple enough for just about anyone to learn. It’s a ton of fun trying to figure out ways to move from sector to sector with limited resources and hoping that once you make it up near the bunker that you have enough soldiers for that final push. I was pretty sure that I was going to like this game, but I honestly did not expect to like it this much.

Recommendations are easy for this one: If you like war-themed games and dice games, you’re probably going to be a huge fan of D-Day Dice.

I’m going to be writing up my top 10 cooperative board games of 2019 list pretty soon, and D-Day Dice (2nd Edition) would probably be in the top 5 if it wasn’t so similar to the first edition (I still consider it to be a 2012 game). That should tell you how much I like this one. Great game.

Update: D-Day Dice (2nd Edition) made it onto our Top 40 Cooperative Board Games list!

Thanks for taking the time to read our D-Day Dice (2nd Edition) review! To stay updated on all things cooperative board games, follow us on Twitter, Facebook, or via RSS.