Skip to content
Co-op Board GamesReviewsThis War of Mine: The Board Game Review 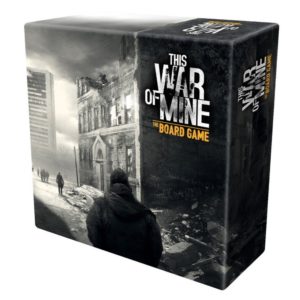 This This War of Mine: The Board Game review was made after playing through one full game (three sessions).

What is This War of Mine: The Board Game?

This War of Mine: The Board Game is a cooperative survival game in which you are normal people trying to make it through each day while a civil war is going on outside. You’ll have to gather all the supplies you can get to keep everyone healthy while also preparing for any danger that might come your way.

This War of Mine, a board game adaptation of a very popular video game, was designed by Michał Oracz and Jakub Wiśniewski, and it is published by Awaken Realms.

This War of Mine Gameplay 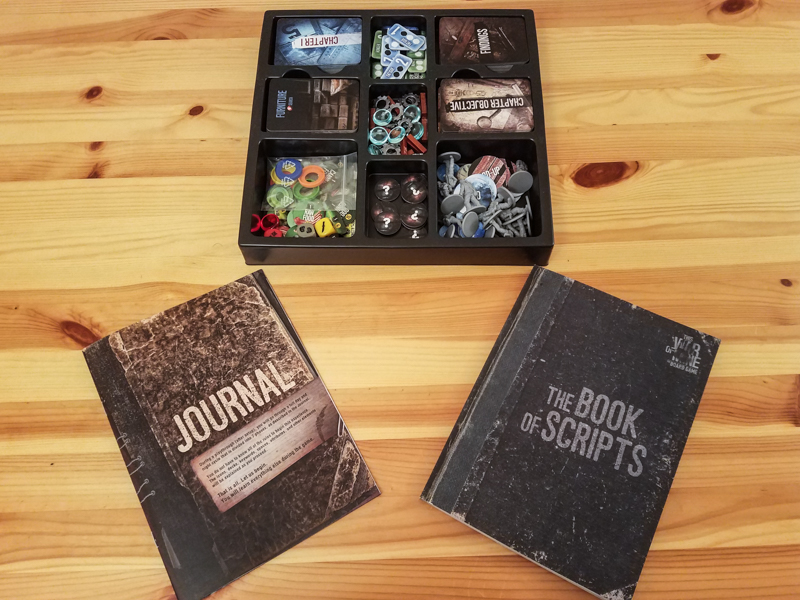 Throughout each game of This War of Mine, all you’re trying to do is keep everyone in your house as healthy as you possibly can. You’ll do this by searching through the house for items, making improvements inside the house, trading with other people you run into, and going to locations outside the house to scavenge.

Rather than each person in your group getting a character to control, everyone gets to take actions for everyone in the house. Also, each player will pass around the “Journal” after they have completed a phase to ensure everyone has a chance to lead the group. The person with the Journal has the final say for the current phase, but players should discuss everything they do throughout the game.

The number of actions each character has depends on their current conditions, which include their fatigue, illness, and misery levels. Some of the characters also have special abilities that they can use during specific phases of the game. 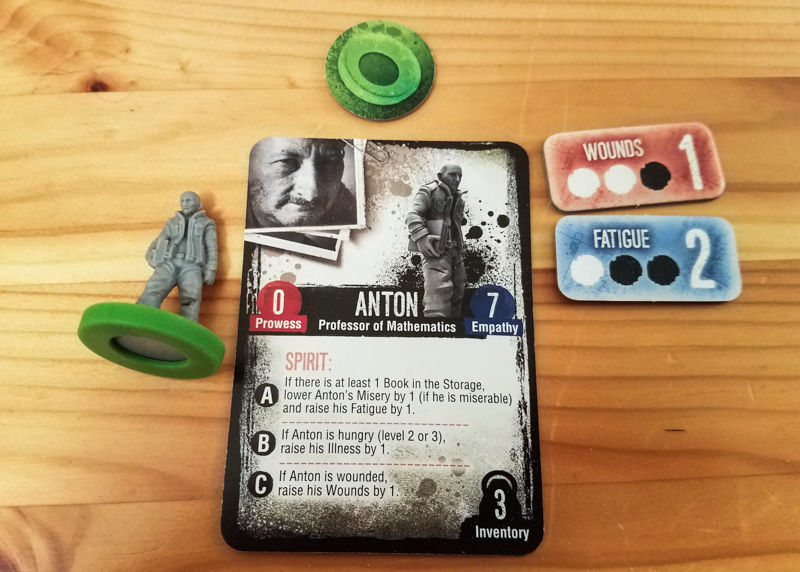 There are seven phases you’ll go through each day: Morning, Day, Dusk, Evening, Scavenging, Night Raid, and Dawn. Once you have completed a full day, you can save the game by using the included save sheets or you can start a new day.

All you do during the Morning phases is draw an Event card and resolve it. In most cases you’ll find out how cold it has gotten and any phases that are affected in any way that round (could be good, could be bad).

The Day phase is one of the two main phases of the round. This is when you get to take worker placement actions with each of the characters in the house. These actions can be looking around the house for items, searching through rubble with a shovel, picking locks to open up new rooms in the house, and quite a few other things. You’ll also have “Fittings” that you can place in the house by using specific resources; for example, you can build a radio by using electrical parts, mechanical parts and components. When you add those Fittings to the house, you gain new, often better actions that the characters can take.

During the Evening phase, you’ll have to decide who sleeps, who goes on guard duty, and who is going out scavenging. Characters need to sleep to reduce their fatigue, but you also need to protect the house and find more items to keep everyone alive. 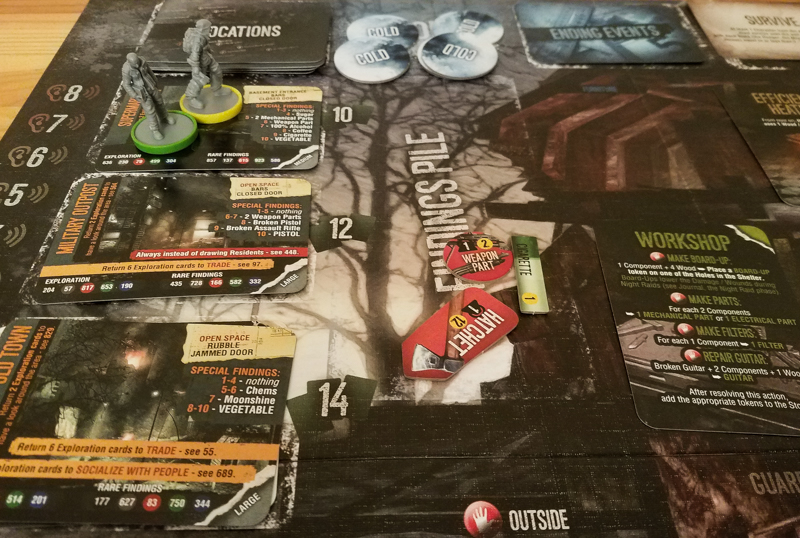 The Scavenging phase is the other main phase of the round. You’ll choose which of the three locations currently on the board you want to visit and what items you want to take with you to trade with and/or to defend yourselves with. While you’re at the location, you’ll be going through a deck of Exploration cards to find out what happens while you’re there. Some of these cards will simply allow you to grab new items, while others might have you raise the noise level or even “roll for noise,” which is when you roll a die to see if anyone in that location heard you. This is the main “push your luck” part of the game because you often have to decide if you want to take a chance and keep exploring or go back home since the noise level has gotten a bit too high. After you’re done exploring, you’ll grab everything that you can (based on your characters’ total “inventory” level) and head back home.

During the Night Raid phase, people will attempt to break into your house to steal from you and possibly attack you. The characters that are on guard duty can fight back by using any weapons they have (and the corresponding dice) and they can reroll dice based on their “prowess” stat. In most cases you will have to give up some items that are in the house during this phase.

Finally, during the Dawn phase all of the characters that went scavenging return home and you can assign medications and bandages to any characters that need them. You’ll then draw a Fate card to see which character conditions get worse or better and if any locations should be replaced. After that you’ll get a Narrative Action card, which will usually give you some type of special ability you can use in future rounds.

Those are the basics of how each phase works, but every game is going to be different and unpredictable because you’ll often have to turn to specific passages from the Book of Scripts. This book can come into play during just about any phase and at any time, sometimes completely changing the game in some way. You’ll often have to draw cards and roll a die to see which page to turn to in the Book of Scripts and then make a choose-your-own-adventure-style choice. This book is also where you’ll be able to see specific rules in more detail when you need to.

You’ll find out specifically what you’ll need to do to win while you’re playing the game, but for the most part you just want to have everyone currently in the house to be as healthy as possible. There are also two scenarios that come in the base game that have different setups and victory conditions. 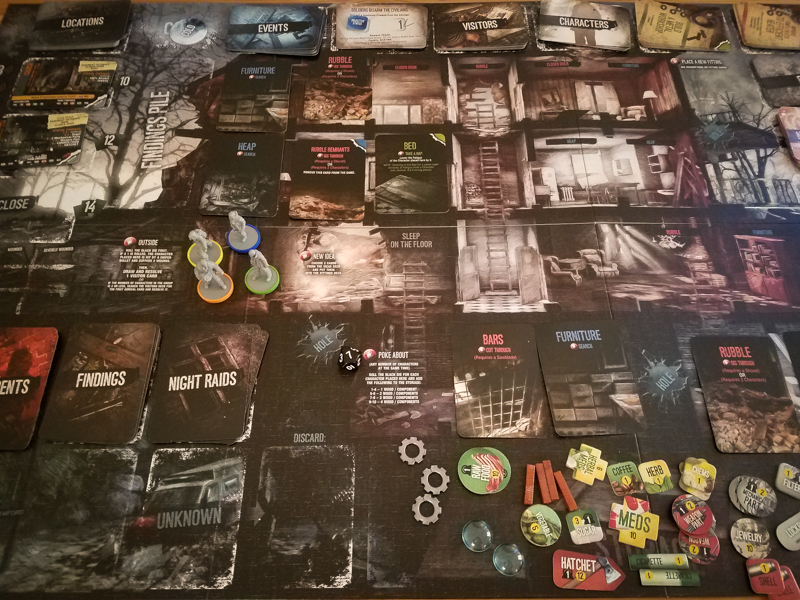 Check out This War of Mine: The Board Game at Amazon

This War of Mine: The Board Game is a fantastic survival game that I think a lot of people would get a kick out of. It’s intense, its theme is unique (in the board gaming world), and there are quite a few surprises inside that Book of Scripts.

I think this game is great and I’m glad I got to play a cooperative version of it, but I know I’ll never play it again simply because it is so similar to the video game and I own that video game. I’d actually say the video game is better since it keeps track of your items for you and I like being able to see the people moving around and performing the different actions.

With that being said, I think a lot of people will want to get This War of Mine: The Board Game. If you already played the video game and want to be able to play it cooperatively, definitely get this. If you like the idea of playing a realistic survival game, you should give this one a try. Also, those looking for a longer solo game will probably love this one.

You probably want to pass on This War of Mine if the theme is too dark/depressing for you or if you don’t like the idea of playing a long game over multiple sessions. If you want a shorter survival game with a war theme, I highly recommend giving The Grizzled a try.

This War of Mine Links

Thanks for taking the time to read our This War of Mine: The Board Game review! To stay updated on all things cooperative board games, follow us on Twitter, Facebook, or via RSS.