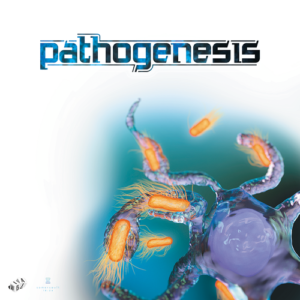 This Pathogenesis review is based on one solo game, three co-op games, three competitive games, and two 2 vs. 2 team games.

Pathogenesis is a deck building game in which you play the part of bacterial pathogens attacking a human body. Your job is to do enough damage to the body before it becomes immune to every pathogen that comes its way.

Pathogenesis was designed by Loren Cunningham and Jamie Cunningham, and it’s published by WIBAI Games. 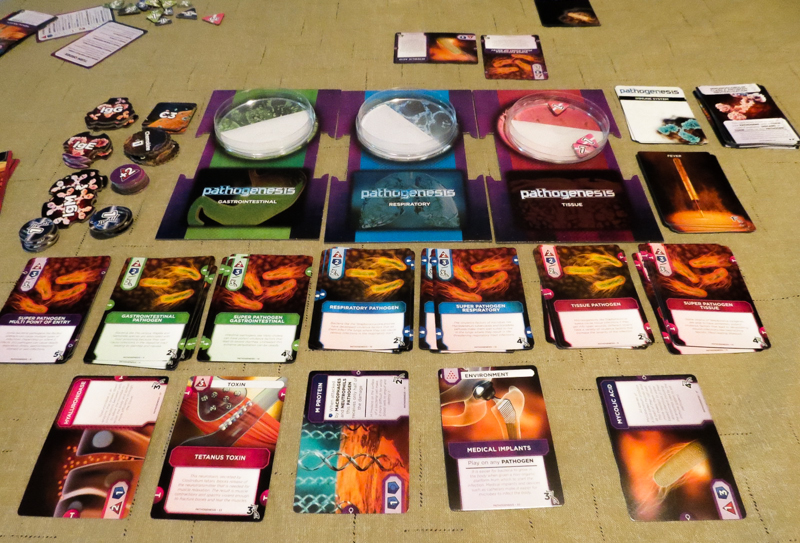 Pathogenesis has four game modes – solo, two-player cooperative, competitive/semi-cooperative, and 2 vs. 2 team play – but they play pretty similarly. Here I’m going to tell you about the basics of the game before going over a few differences between the four game modes.

You’ll begin each game of Pathogenesis with a starter deck of cards. This deck includes some starting pathogens and some New DNA cards.

The pathogens are what you’ll be putting on the table so you can attack the body. If you don’t want to use them as pathogens, you also have the option to use their genetic value, which is the currency in the game.

The New DNA cards are worth one genetic value apiece, but they also have two other uses. You can use them to discard a card from the Active Gene Pool, which is where you buy the cards to make your pathogens stronger. You can also trash the New DNA cards to use their special abilities, allowing you to get the benefit of the ability and thin out your deck.

Throughout the game you’ll be attacking one or more of the body’s three tracts. You’ll first have to attack each tract’s barriers by going through their decks of cards. Each barrier card simply has a defense value, so if your pathogen’s attack value is equal or higher, you’ll discard that barrier card. When you do defeat a barrier card, you’ll get genetic value tokens equal to its defense value, which help you to buy better cards in the future.

After you’ve fought through a tract’s barrier deck, you’ll be able to attack the body directly in that tract, removing damage tokens based on how much damage you do. Unfortunately, after the first barrier is taken down, the immune system is going to start attacking your pathogens before they get a chance to attack. You’ll draw one Immune Response card for each pathogen you have in play and check to see if your pathogens have enough defense to survive. Any pathogens that do survive will then attack. 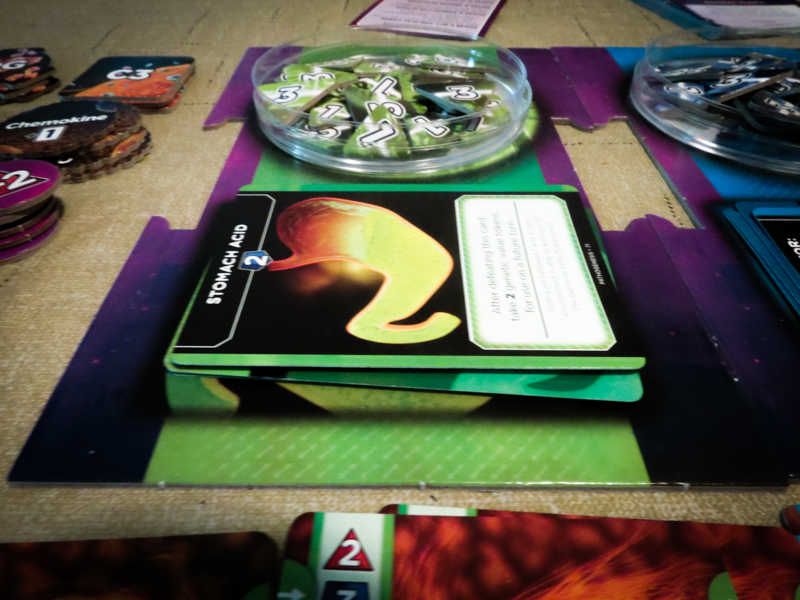 Throughout the game you’ll be using your cards’ genetic values and the genetic value tokens to buy new cards from the Active Gene Pool. The Active Gene Pool consists of more powerful pathogens, as well as toxins, traits, and environment cards. Traits can give you attribute bonuses and special abilities, toxins give you the biggest attack boosts, and environment cards give you immediate abilities and are discarded at the end of your turn.

In all four game modes, you’re trying to take down a certain amount of tracts before the Immune Response deck is depleted. You’ll have to take down one tract in the solo and competitive modes, two tracts in team play mode, and all three tracts in co-op mode.

In the competitive and team play modes, you’ll be collecting the damage counters that you’ll gain when attacking the body. Whoever ends up with the most counters wins.

In all four modes, everyone loses if you need to draw an Immune Response card and none are left.

That’s a pretty basic overview of how to play Pathogenesis. If you want to learn more, check out the official rulebook (PDF).

Check out Pathogenesis at Amazon

If the science theme in Pathogenesis interests you at all, I highly recommend checking out this game. I have taught this one to five people who had never heard of it and all of them have become fans. In fact, if it allowed for three and four-player cooperative play, I’m pretty sure it would eventually end up on our Top 10 Deck Building Games list. We really have enjoyed it that much.

Thanks for taking the time to read our Pathogenesis review! To stay updated on all things cooperative board games, follow us on Twitter, Facebook, or via RSS.