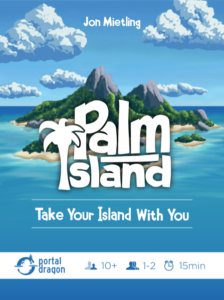 This Palm Island review was made after playing the game about 12 times. We were sent a copy of this game by the publisher in exchange for an honest review.

What is Palm Island?

Palm Island is a unique resource management card game from Jon Mietling and Portal Dragon in which you’re attempting to use your cards to upgrade your island and get as many points as you can. You don’t need a table to play it as the entire game is a 17-card deck that can be played in two hands. The game has solo, cooperative, and competitive modes. 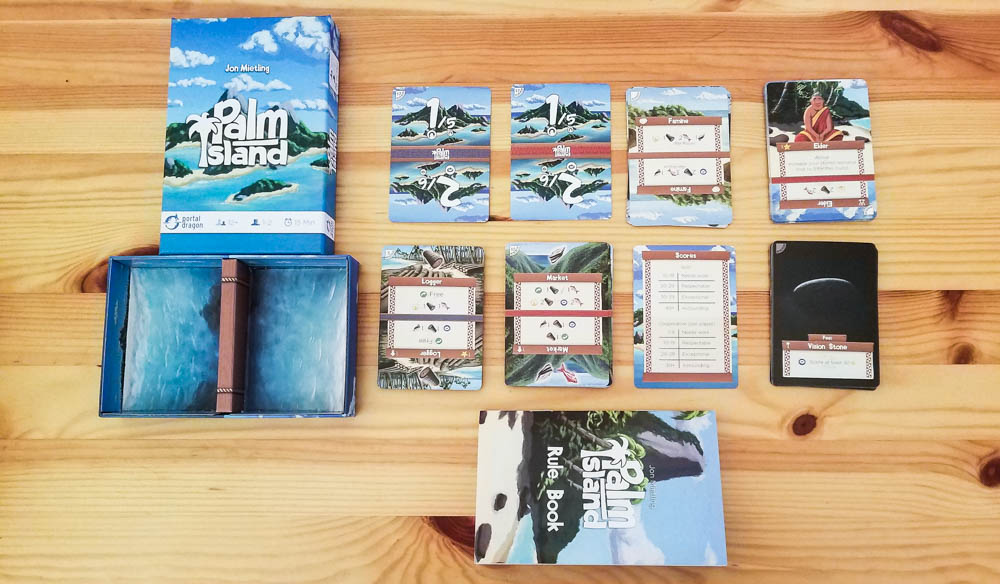 To begin a game, you’ll shuffle up the cards and then place the round tracker card at the back.

The three types of actions you can take are:

If you perform an action that costs resources, you simple rotate those resources 90 degrees counterclockwise.

The round ends when the round tracker card makes it to the front of the deck. At that point you just rotate that card and continue playing. After you’ve gone through eight rounds, you’ll count up your stars and look at the score chart to see how well you did.

The key to the game is figuring out when to use your resources. You’ll want to upgrade resource cards to give you a better mix of resources in future rounds, but you’ll also have to figure out when you should upgrade the big point cards.

If you’re playing the solo game, you can look through the Feat cards at the end of each game to see if you unlocked any cards. Unlocked Feat cards can be added to your deck in future games, giving you new special abilities.

In the two-player cooperative game, you’ll be attempting to avert disasters while also trying to get a good score. You’ll choose one of the three Disaster cards at the beginning of the game and will need to collectively use some of your resources to deal with it before the end of the game. There are also Ability cards that can be added to the cooperative game that, when activated, will give both players special abilities.

The two competitive modes (Casual and Speed) add in Outpost and/or Villager cards that will give you new ways to gain resources and score points.

That is just a basic overview of the rules. Check out the official Palm Island rulebook at BGG for more info on how to play the game. 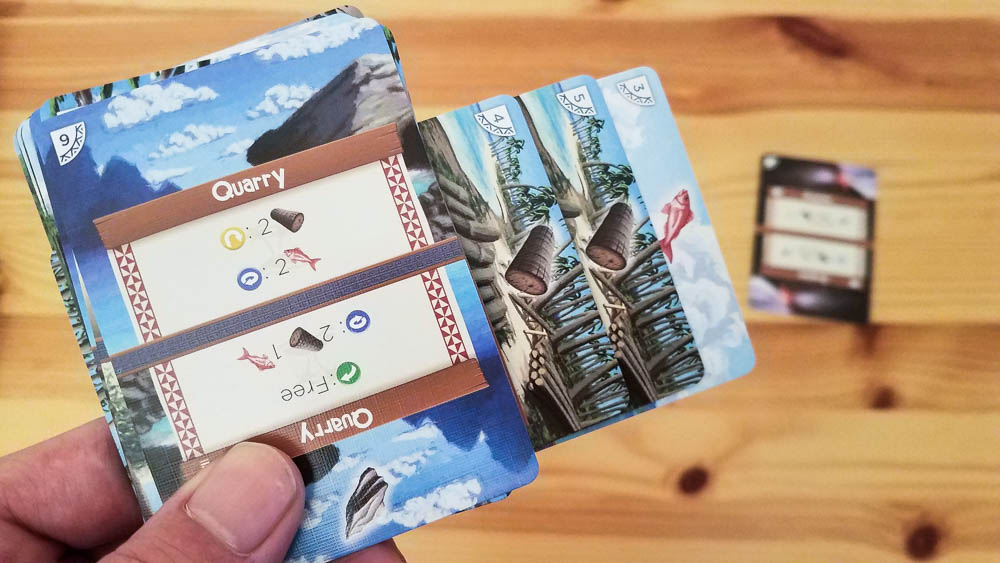 Palm Island is a unique card game that I think a lot of people will enjoy. It’s an excellent travel game since you don’t need a table to play it, and each game mode works really well. I actually like the competitive speed mode the most, but they’re all fun. I am definitely happy to own Palm Island because I now have a filler game that I can play absolutely anytime and anywhere that I want to.

If you like going for high scores in games, you’ll probably enjoy Palm Island because it is kind of addictive in that way. If you’re looking for a game that you can take with you anywhere, yeah, get this one. Really, if the game sounds good to you, chances are you’ll end up liking it. If it doesn’t, you probably won’t.

Thanks for taking the time to read our Palm Island review! To stay updated on all things cooperative board games, follow us on Twitter, Facebook, or via RSS.