Skip to content
Co-op Board GamesReviewsA Tale of Pirates Review 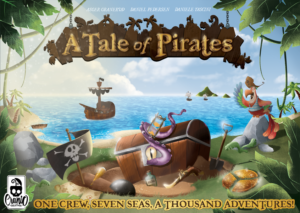 This A Tale of Pirates review was made after playing through 5 of the 10 chapters.

What is A Tale of Pirates?

A Tale of Pirates is a real-time game in which you play as pirates who go on different missions on your ship. You use worker placement spots on or around your ship to take actions and each chapter of the 10-part story introduces new goals and enemies.

A Tale of Pirates was designed by Asger Harding Granerud, Daniel Skjold Pedersen, and Daniele Tascini, and it is published by Cranio Creations.

A Tale of Pirates Gameplay 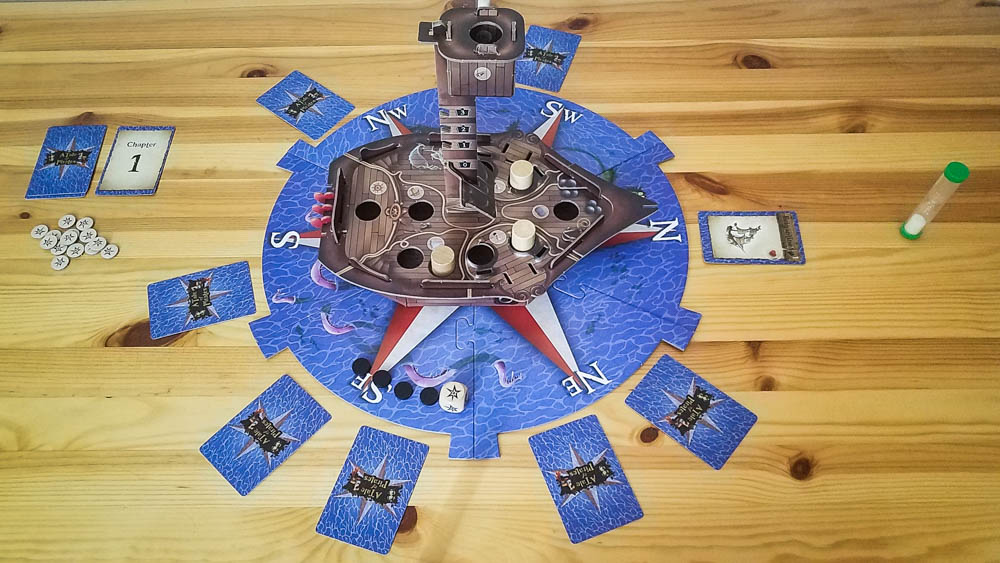 The A Tale of Pirates app walks you through the setup process for every chapter in the game. It will tell you the cards that you’ll need as well as information on any of the components that are new in that chapter. After you’re set up, you’ll choose your player count and a difficultly level. You’ll then hit the Start button for your chapter and the timer starts.

Regardless of the chapter, you’ll always have your own sand timer (or two apiece in a two-player game). There are worker placement spaces on the ship that you place your sand timers in when you want to take actions. After placing your sand timer, you have to wait 30 seconds for all of the sand to reach the bottom before taking the action.

The basic actions you can take include moving the sails to adjust the ship’s speed, steering the ship, climbing the mast to look at any of the cards around the ship (enemies, rocks, fog, etc.), repairing the ship (removing corks from action spaces), loading cannonballs, and firing the cannons.

Your goals will change from chapter to chapter, but for the most part you’re trying to search for places and/or items while also clearing out enemies. You’ll have to play through multiple timed rounds each chapter, and at the end of each round any remaining enemies attack you.

After you’ve completed a chapter, you’ll select the number of life points you have remaining and any corks (damage) still on the ship. Then you’ll get a score and move on to the next chapter. If you failed (ran out of life points), you’ll have to play that chapter again before you can move forward in the story.

A Tale of Pirates is just flat-out fun and I’m really looking forward to playing through the rest of the story. If you’re a fan of real-time games, the pirate theme, and challenging co-ops, I highly recommend checking this one out. I could also see it going over well as a family game, especially for families with older kids.

My group has had a blast playing A Tale of Pirates and there really isn’t another cooperative game like it right now, so this is a keeper. (Kitchen Rush is another real-time worker placement game that uses sand timers, but this feels like a very different game to me.)

Update: A Tale of Pirates made it onto our Top 10 Real-Time Games list!

A Tale of Pirates Links

Thanks for taking the time to read our A Tale of Pirates review! To stay updated on all things cooperative board games, follow us on Twitter, Facebook, or via RSS.