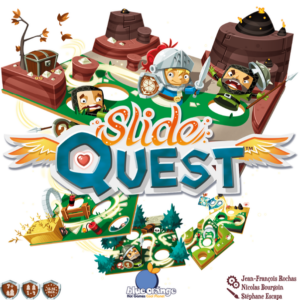 This Slide Quest review was made after playing the game about 20 times.

What is Slide Quest?

Slide Quest is a cooperative dexterity game in which you attempt to help a knight save his kingdom. You and up to three other players use levers to slide the knight around the board to complete missions. 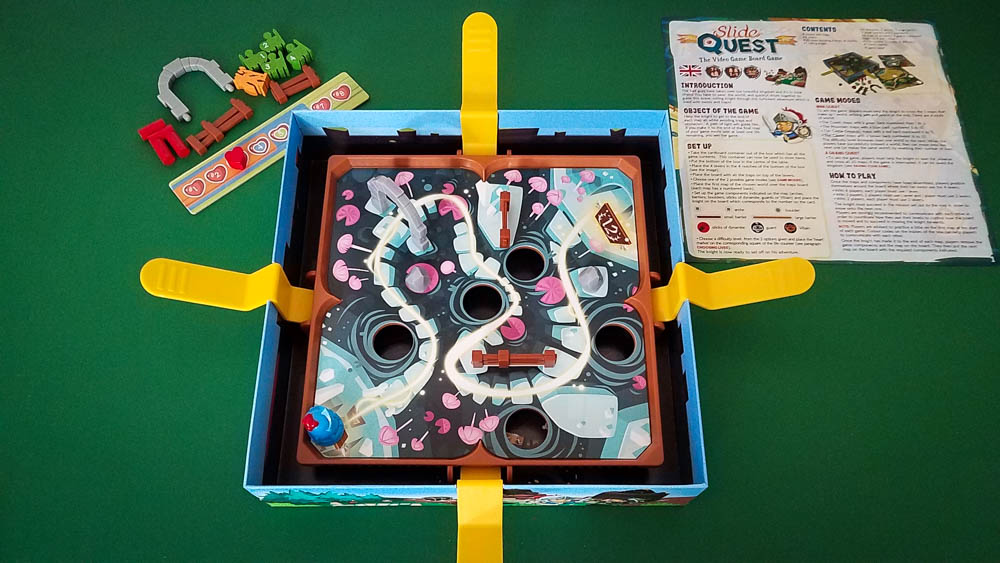 To set up a game of Slide Quest, you put the levers in the four slots in the box, put the board on top of them, put a map on the board, then place the knight and any other needed components on the map. That’s it!

Gameplay is very simple. You use the four levers to slide the knight around the map and, after you complete the map’s mission, you have to make it to the numbered destination spot. If you’re playing with the real-time variant, you have to reach the destination spot before time runs out.

There are 20 maps included with the game. On some maps you have to stay on a path and avoid obstacles, while on others your main mission is to push guards and/or a villain into the traps/holes. On the easier maps you can push the guards into any of the holes, but on the tougher maps you have to push each numbered guard into the corresponding numbered hole. A lot of the maps also have sticks of dynamite that you usually want to avoid.

At the beginning of your quest you’ll get a certain number of “lives” based on your chosen difficulty level. You can lose lives in different ways, including when the knight falls into a hole, when a stick of dynamite tips over or falls into a hole, or when a guard or the villain is pushed into the wrong hole. You can gain lives back by sliding the knight over the heart symbols found on a lot of the maps.

Slide Quest has two main game modes. In Mini Quest, you attempt to play through five maps/levels without losing all of your lives. In the A Grand Quest game mode, you try to make it through all 20 maps. If you’re playing the real-time variant with the app, you can choose from three difficulty levels to play. There’s also a Game Saver included with the game that allows you to save your progress. 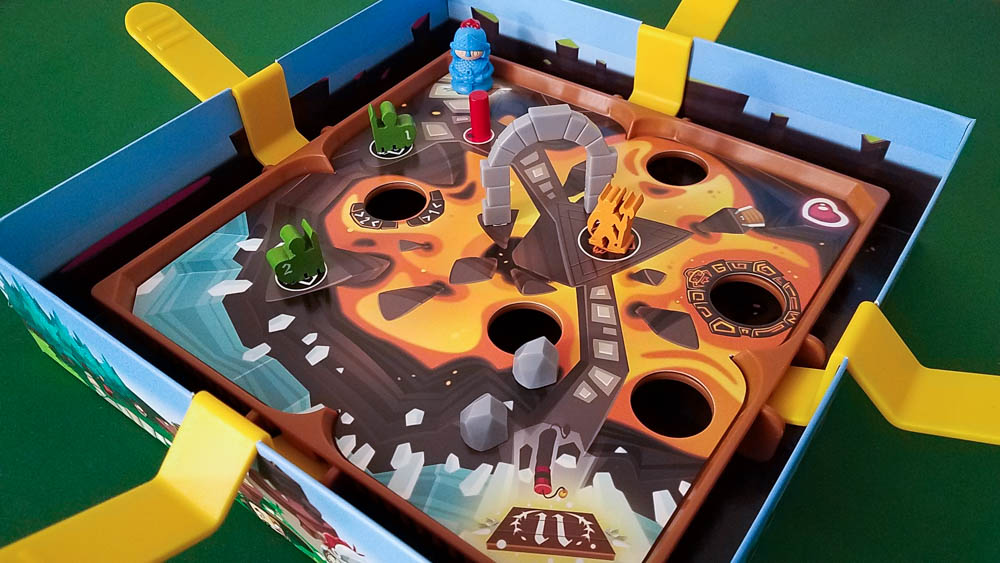 Slide Quest is just pure fun. It’s a unique co-op that has a great look to it, plenty of tension, and a good amount of replay value. I’d never play it untimed again since that got boring pretty quickly, but I’ve really enjoyed the real-time variant. Once my group is finally able to beat all 20 levels, I’ll be keeping this one on my shelf as a quick filler game option because I know it can work with any group.

I can easily recommend Slide Quest to gamers and non-gamers of all ages who think they’d enjoy this type of dexterity game. If you don’t like dexterity games or you prefer to stay away from games that have potential quarterbacking/alpha gaming issues, you should probably pass on this one.

Update: Slide Quest made it onto our Top Family Games list!

Update 2: It also made it onto our Top Real-Time Games list!

Thanks for taking the time to read our Slide Quest review! To stay updated on all things cooperative board games, follow us on Twitter, Facebook, or via RSS.