This Tiny Epic Defenders review was made after playing the game five times.

What is Tiny Epic Defenders?

Tiny Epic Defenders is a cooperative adventure board game designed by Scott Almes and published by Gamelyn Games. In this game, hordes of treacherous monsters are approaching your capital city. You and your friends must fight, defend, and ultimately defeat the Epic Foe in order to save the city.

Players select one of the 10 heroes, each of which has his or her own special ability. Throughout the game, you and your fellow heroes will be moving around and trying to keep the six regions that surround the capital (and the capital itself) from being destroyed.

During each round, you will draw and resolve a card from the turn deck. These are usually enemies attempting to attack the outer regions of the kingdom. Enemy cards show a location that is affected, and you move that area’s threat counter up by 1. If a location’s threat level ever reaches the top of its meter, that area is destroyed. If a destroyed region is attacked, the attack hits the capital city.

The tougher enemies in the game are called Dire Enemies. These monsters are a little more powerful, but they also give you Artifacts when you beat them. Artifacts give players one-time abilities that make it a bit easier to defend the kingdom. 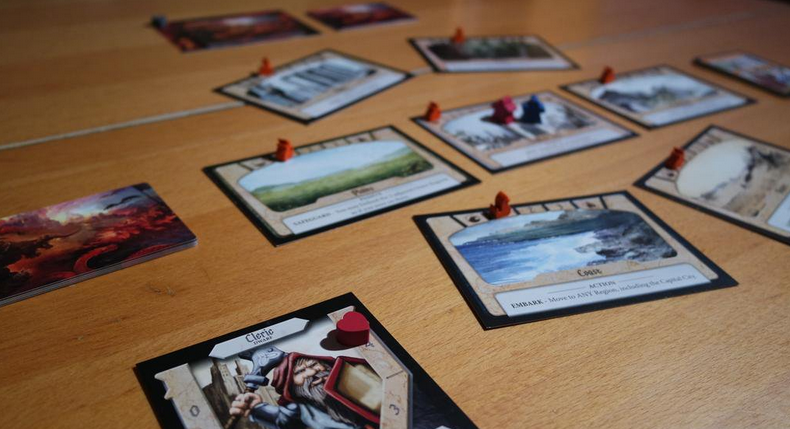 The turn deck also contains Ally cards, which can help the players throughout the game. These cards allow heroes to take actions, which they can use to move around, use the locations’ special abilities or use Artifacts.

If you can destroy the Epic Foe before the capital city is destroyed, you win!

While Tiny Epic Defenders looks great and was a great idea, most of the people in our group think it’s a bit too repetitive to be a keeper. It doesn’t bring anything new with its action point system, and there isn’t enough content in the box to warrant too many plays.

If you’re a fan of games with action point systems, definitely check out Pandemic, Flash Point or Defenders of the Realm.

If you do end up enjoying this game, you will probably also like Tiny Epic Kingdoms and Tiny Epic Galaxies. Those aren’t co-op games, but people who have enjoyed one of the games in the series usually end up liking all of them.

UPDATE: There’s now a new second edition of the game, which is supposedly quite a bit better than the first edition.

Thanks for taking the time to read our Tiny Epic Defenders review! To stay updated on all things cooperative board games, follow us on Twitter, Facebook, or via RSS.