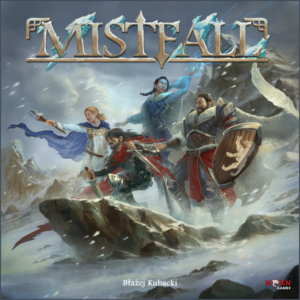 This Mistfall review was made after playing the game five times.

In Mistfall, the kingdom is threatened by a great impending darkness and has called upon its greatest heroes. You and your fellow travelers are equipped with your own unique abilities, strengths, and weaknesses and must work together to defend the kingdom.

Mistfall was designed by Błażej Kubacki and published by Games Factory Publishing.

At the beginning of Mistfall, you will choose your characters and the quest that you will be playing through. Each character comes with a basic set of abilities and health that determines their starting equipment.

Each quest has its own story and randomized encounters, but it can also feed into a larger story that can be put together by playing multiple quests. You must complete each quest before the time tracker reaches the end, indicating that you have lost the kingdom.

As you and your teammates move from one location to another, you will deal with encounters. During these encounters, the heroes and enemies will each take turns battling it out. Players need to either defeat the enemies or gather enough progress to move on to a new location. 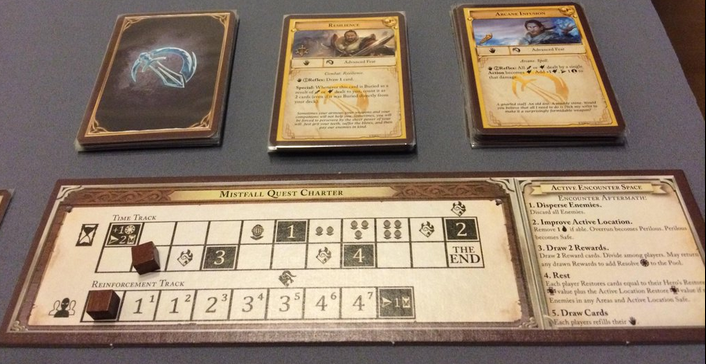 Each player’s primary job is to build his or her character the best way possible for the mission at hand. To do this, you will use your unique starting deck and add on to it with upgraded cards that you can buy throughout the game. Cards can be used to do a number of things, from fighting, going on the defensive, or even to get more cards into your hand. If you ever run out of cards, your character is out of the game.

That is a very brief overview of how the game works. Check out the official Mistfall rules (PDF) if you want to see exactly how to play the game.

Sometimes you appreciate a game simply because you know a ton of effort went into making it. That’s pretty much how I feel about Mistfall. It’s a nice-looking game and it does give you a pretty good co-op experience, but it just hasn’t been a hit with my group. We have stayed pretty engaged through each 2+ hour playthrough, but that’s mostly because there is A LOT you need to keep track of throughout the game and the puzzle is tough to wrap your head around at times.

I do like Mistfall – it’s a challenging game and it does a good job of making you feel like powerful adventurers – but I’d like to see a new edition with a streamlined ruleset and a bit more art variety.

Thanks for taking the time to read our Mistfall review! To stay updated on all things cooperative board games, follow us on Twitter, Facebook, or via RSS.