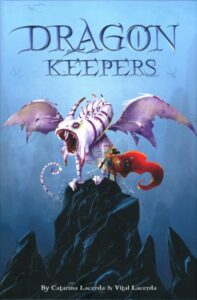 This Dragon Keepers review was made after playing the game six times. We were sent a copy of this game by the publisher in exchange for an honest review.

This is a review of the co-op game, though I will go over the differences between the two game modes.

What is Dragon Keepers?

Dragon Keepers is a fantasy card and dice game in which you play as humans (keepers) who are attempting to protect their dragons from vengeful Vikings. The cooperative ‘Dragon’ mode is a family-weight hand management and deduction game, while the competitive ‘Keeper mode’ is more of a straightforward card game that was designed for families with younger kids. 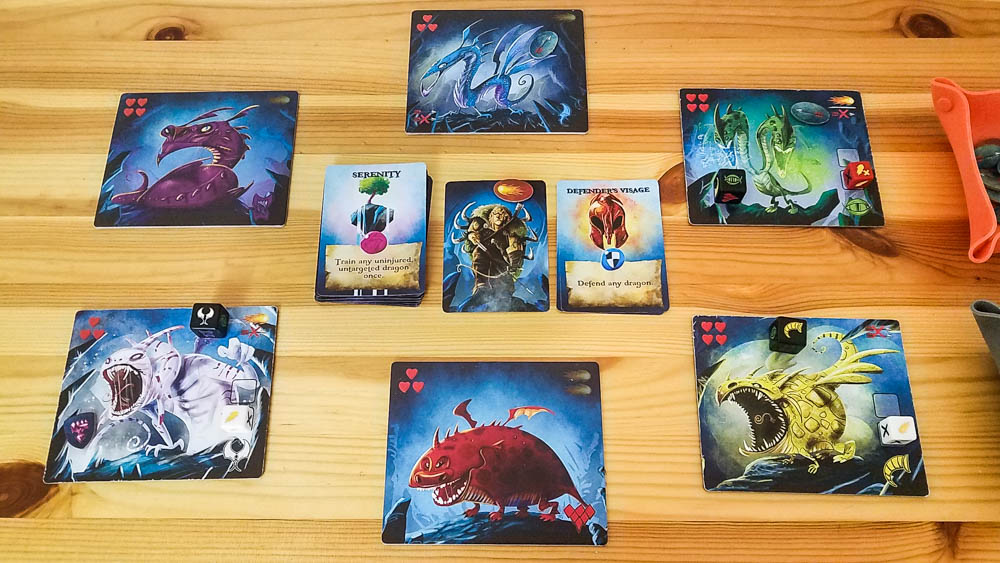 In this co-op version of Dragon Keepers, you’re working together to fend off Vikings who are trying to defeat your dragons. Your goal is to have a certain number of dragons perform successful attacks before time runs out and before any of the dragons are defeated.

Each round the hunters’ dice are rolled to see which dragons will potentially be attacked. Then, in turn order, each player will either pass their turn or play one of their six cards face-down and place one of their action tokens on top. Then, again in turn order, everyone will reveal their cards and perform their actions. After that, if any of the hunter dice are still on any of the dragon tiles, those dragons will take damage.

There are four types of actions you can perform each round. You can block hunter dice with the defend action, remove a dragon’s wounds with the heal action, train a dragon so it gains battle dice (and you gain a new action token of any kind), and you can attempt to attack with a dragon by rolling those battle dice. You put all of your used cards and tokens off to the side and can’t get them back until you pass. Your turn is skipped when you pass.

When you successfully perform the defend and heal actions, you get to take one of the magic cards from the middle of the table, either from the top of the deck or from the discard pile. These cards give you one-time-use powers and can be played when you play your keeper cards. The magic deck also acts as the game’s timer; at the beginning of each round, the top card of the magic deck is moved to the discard pile. There are also four hunter cards in the deck that give the hunters more dice to attack with.

The trick to this game mode is figuring out which cards and action tokens to use each round to ensure that everyone is able to resolve their actions. Most rounds you’ll be able to deduce what other players are playing based on turn order and past plays (you can see everyone’s used cards and tokens), but there will be rounds when you’ll be forced to either take chances or play it safely.

This is a competitive game designed for younger players. The action tokens and the magic cards aren’t used in this mode. You’re simply trying to be the first player to successfully defend three dragons. Each round, the hunter dice are rolled and then everyone secretly chooses which dragons they’re going to defend. Each time you’re the only one defending a dragon, you’ll place one of your three shield tokens on its tile. If any dragon is defeated, the winner is the player who has placed the most shield tokens.

Dragon Keepers fits perfectly in that “light yet satisfying” category of co-op games that most folks enjoy. I think the Lacerdas nailed what they were going for here, creating a family-weight game that is challenging and that has a theme people can easily get into. It’s not the type of game that is going to blow anyone away, but it’s one that will stay in a lot of collections because it has a unique deduction mechanic, it’s challenging, and it’s portable.

This kind of feels like How to Train Your Dragon: The Card Game, making it a great choice for families (or even adult gaming groups) who have enjoyed those movies.

Thanks for taking the time to read our Dragon Keepers review! To stay updated on all things cooperative board games, follow us on Twitter, Facebook, or via RSS.