Skip to content
Co-op Board GamesReviewsChoose Your Own Adventure: House of Danger Review 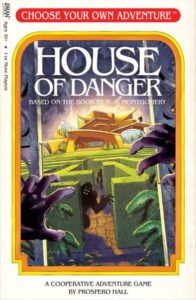 This Choose Your Own Adventure: House of Danger review was made after playing through all five chapters.

What is CYOA: House of Danger?

Choose Your Own Adventure: House of Danger is a cooperative game in which you play as an aspiring detective and psychic investigator who is trying to find out why he is having strange nightmares. The game was designed by Prospero Hall and is published by Z-Man Games. 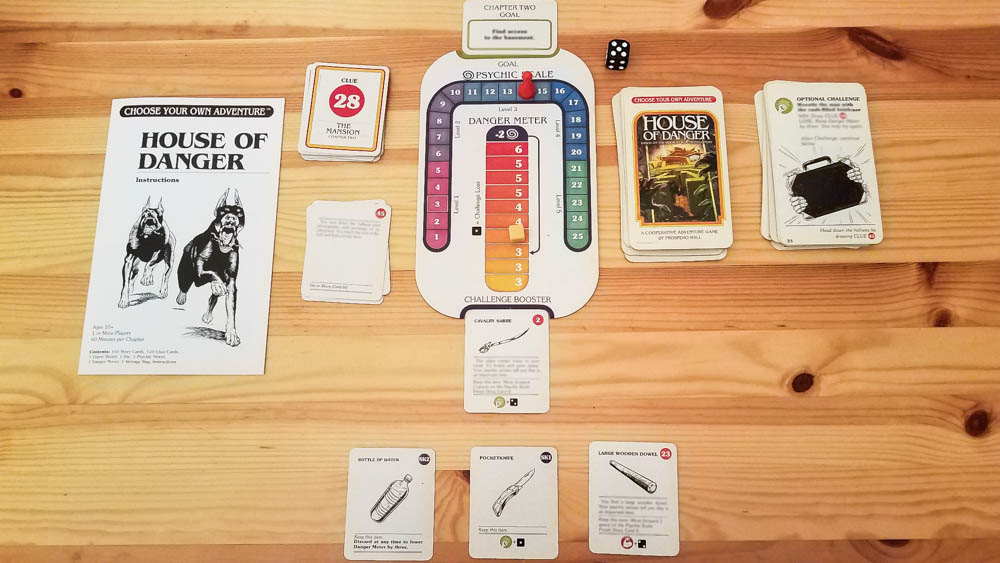 Pretty much all you have to do to set up a game of Choose Your Own Adventure: House of Danger is get the Story cards and Clue cards for your current chapter. If you gained any items during previous chapters, you get to take those with you into future chapters.

During each chapter you’ll be reading Story cards one at a time and following the directions found on those cards. In most cases you’ll have to decide between two or more story choices and you’ll grab a specific Story card based on your choice. Sometimes there will be optional or required challenges on the cards.

You’ll also gain Clue cards throughout the game. Some just move the story along, while others are items that get added to your inventory. Many of the items are Challenge Boosters that make some of the challenges easier.

There are two tracks on the game board, the Danger Meter and the Physic Scale. The Danger Meter goes up and down as you take on challenges and you’ll need to match or exceed the current number shown on the track when you’re attempting a challenge. The Psychic Scale represents your powers as a physic investigator and will help you get Premonition cards, which are images that might give you clues about what’s ahead.

Once you’ve reached the “Goal Achieved” card in the first four chapters, you’ll have the option to go back and check out other areas for items you might need or you can move on to the next chapter. There is no “losing” in this game, so if you ever reach a “The End” card, you’ll simply move the Danger Meter up and go back to the last card.

And that’s about all you need to know. You’ll go through the five chapters and find out what happens to your character.

Choose Your Own Adventure: House of Danger is an odd one for me. I like it and my group had fun reading through the story, but I wouldn’t recommend it to people looking to play a choose your own adventure game.

Like I said above, I’d probably recommend the book this game is based on over the game. It’s about a quarter of the price and there are four times as many endings.

All of that being said, if you’ve already read the book and you like what this game adds (board, cards, and dice rolling), you probably won’t be disappointed. Just know that it isn’t that much different than the book.

If you’re looking for a choose your own adventure board game that you can play with your younger kids, I’d suggest Robit Riddle. If you’re planning on playing with older teens or other adults, Dead of Winter, The 7th Continent, or This War of Mine might work.

Thanks for taking the time to read our Choose Your Own Adventure: House of Danger review! To stay updated on all things cooperative board games, follow us on Twitter, Facebook, or via RSS.